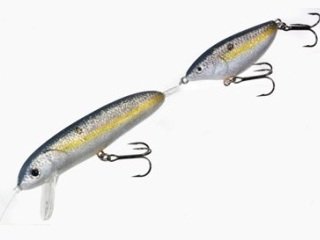 When it comes to presentation and rigging, there are dozens upon dozens of methods to choose from in order to entice fish to bite. The Texas Rig, drop shotting, spinnerbait burning, surface poppers—the list goes on and on—but one method that has seen a rise in usage over the years is known as tandem rigging. There are a few different variations to this setup, and knowing when and where to use it is the key to mastering this effective rig. Simply put, a tandem rig is when you have two lures rigged to the same line in order to create the image of a pair of baitfish. This effect can be performed a few different ways, with a few different types of lures, and is very useful when fish are schooling or feeding aggressively.

A situation where the tandem rig has been used with great success is speckled trout fishing around the oil rigs in the Gulf of Mexico. From personal experience, I know that Capt. Bill Lake, a Louisiana guide, swears by a rig involving a soft plastic lure rigged normal, with length of leader tied a foot or so above the main lure, so that the two lures run near each other in the water. Trout tend to feed in large schools during the late winter months, and doubling the amount of lures you’re casting doubles your chances of bringing more fish into the boat. Texas Tackle Factory, a Southern-based tackle company, also sells a variety of tandem rig baits for anglers to use on specks during the season’s optimal periods for such a presentation.

You can find the tandem rig in hard baits, too, however, and XPS offers a dual-lure system called the Double Take that does a great job when fish are more active and surface action is prominent. The Double Take consists floating minnow bait trailed by a slow-sinking shad bait. The minnow possesses a thin, hollow tube that passes through the body from the nose to the tail, through which you’ll feed your line. Then, tie the shad bait to the line and cast out. On either a straight, consistent or even a jerky, erratic retrieve, the bait imitates a pair of fleeing or wounded baitfish that hungry, aggressive fish can’t resist.

You don’t have to charter a guide or purchase a kit at your local retailer to use a tandem rig, though. If you have a few old (or new, if you prefer) surface lures like a Spit n’ Image or Zara Spook, you can make your own. What I’ve done in the past is remove the tail treble hook from a surface lure and tie my main line to the nose line tie. Then, I tie a length of leader—usually 10-14 inches—from the tail to the nose tie of another surface lure behind the main lure. It’s a great, versatile setup that’s helped me catch hungry pike, active bass, and even schooling redfish in Louisiana. A good tip, especially in saltwater, is to watch for schools of baitfish or the birds that feed on them. If you cast a tandem near a school when larger fish are feeding, the rig will look like a pair of stragglers and will attract followers.

Just like with other rigs, a tandem rig is best utilized when fish are more active and during peak baitfish seasons. Of course, that doesn’t mean you can’t try it out during other times of the year as well. Who knows? Maybe a pair of fleeing baitfish at the peak of autumn will be just the change of scenery your local fishery has been waiting for.