No Engine? No Problem: Float Tubes 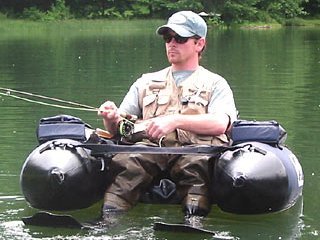 Now that you’ve learned some of the benefits of fishing from canoes, including their silent movements, low costs, and versatility in the water, I’d like to highlight a device that some of you may have ever heard of: the float tube. Most anglers who have never ventured into the fly fishing department of their nearest outdoor retail store may not know what float tubes are, but I’ll tell you, they’re not just for fly fishermen. These floating devices are great means of leisurely fishing coves and shorelines, and shouldn’t be overlooked when considering an engine-less craft for your own needs.

Float tubes are, in the simplest of descriptions, floating chairs. Imagine your favorite recliner, now imagine it with pontoon-like, inflatable tubes under each armrest, and you’ve got a float tube. Of course, that’s a slight exaggeration, but float tubes are basically seats that you propel, with the aid of flippers, by kicking your legs underwater. This allows for more stealth in the water, which any angler will tell you, is priceless.

Float tubes, like canoes, are very inexpensive, and cost around a hundred dollars, with some even as low as fifty dollars. Companies such as White River, for example, make great float tubes with compartments for tackle storage that will have you forgetting that you ever needed a tackle box in the first place. Furthermore, unlike boats, which require gasoline, float tubes require only air to fill up their floatation bladders, something that your wallet will thank you for.

Float tubes allow you to get right into the water, which provides many advantages. You can directly feel the current and water temperature, for example, which will help you choose the right tackle for your fishing. Also, in a float tube, you’re at eye level with the water, which makes fighting a fish much more fun, especially when your catch leaps or head shakes. Also, being in the water while you fish will make those unbearable 90 degree summers a little more tolerable.

Float tubes do require a bit more work to operate, will put some strain on your legs after a few hours, especially if you’re legs don’t usually get a good workout. Also, like tents, the material can be ripped, but most come with patch kits to quickly repair any tears or holes you may endure during your trip. Like canoes, your storage capacity is also limited. However, as I stated earlier, most float tubes are equipped with storage, and you can also wear a fishing vest, which will compound your options for storing gear.

If float tubes are something you’ve never considered, or if you’ve seen them in the past and weren’t quite sure if they were right for you, I suggest taking some time and asking an associate in the fly fishing department about them. After comparing some models and learning some of the benefits of these great little crafts, you may decide that they’re just what you need for your leisurely trips to the local lake or river.