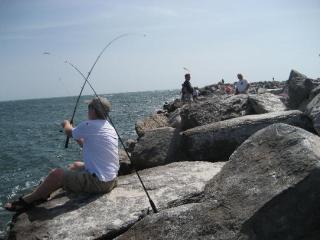 Whether you’re seeking smallmouth, steelhead, redfish, or sea trout, the rock formations, known as jetties, are prime locations to start your search. These walls are filled with holes and ambush points for all species to utilize, and are known for producing strikes and good numbers of fish. While most anglers will set up shop on these structures and toss out a line, many times it’s not that easy. Fishing jetties does, in fact, require a different approach and, after reading this article, you too can come home with a great limit and some great stories after tackling your local rock walls.

Jetties appeal to both predator and prey species of fish for a number of reasons. For prey, the intricate passageways and holes created amidst the rocks serve as havens from larger species. Predators love these holes for their own reasons: they can ambush passing baitfish by hiding in them. Other prey items, such as crayfish, are found among the rocks that make up jetties, and many fish take advantage of the abundance of such food sources.

There are many fishermen who venture out onto jetties, braving the crashing waves and slick rocks in hopes of landing trophy fish. While some jetties are less perilous than others, the risk of drowning or injuring yourself by slipping on the rocks isn’t worth a few fish. Anyone who does wish to fish jetties while standing on them, though, should wear cleated boots and a life vest. Anglers with boats should anchor out within casting distance of a jetty and cast towards the wall from the boat.

Down South, where sea trout and redfish call jetties home, live shrimp under a popper works extremely well. Cast the bait roughly eight to ten feet from the jetty and give your rod a few hard twitches to pop the bait. Then, watch your popper go under and prepare for a fight. For smallmouth in the northern states, swimbaits and leadhead jigs work well, as they imitate baitfish perfectly. Just be sure, wherever you find jetties to fish, what you’re seeing in the top of a pile of rocks. Careless anglers will become frustrated if they don’t retrieve their baits correctly and become snagged on the many rocks that make up jetties. Be sure to know how your lure works and work each one carefully.

Jetties are home to the entire food chain, and house their own ecosystems where life abounds. From predator species like redfish, all the way down to minnows and crayfish, any angler can usually pull in good numbers from these rock formations. The key is just understanding how fish perceive and use jetties for their own purposes and cater to that by selecting lures and baits that provide natural presentations. Focus on the retrieve (snagging a lure on rocks is a battle in itself), and mind your footing should you venture out onto the rocks. A little spill on slick rocks can turn into a serious injury, which will ruin any fishing trip.