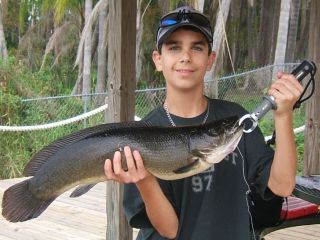 If you’ve been keeping up with the Fishing Section of LiveOutdoors, then you’ve no doubt read my article on the Alligator Gar, a species which I feel has earned itself an unjust reputation as nothing more than a destructive predator. Species such as the gar are no different than more popular sport fish, such as bass or crappie. They eat the same prey items as bass, and defend their territory in the same fashion, yet, due to their aggression or even their appearance, they’re hated among the fishing community. Well, as I am strongly opposed to the senseless killing of anything, I’m back today to do my part in opening anglers’ eyes to true nature of another supposed “nuisance” fish: the bowfin.

Known by many monikers—dogfish, mudfish, swamp muskie, etc.—the bowfin, at first glance, is a different kind of fish. Long and slender, much like a pike, but with a blunt, rounded face like a bass, the bowfin doesn’t seem very predatory. However, as any angler can tell you, the longer and skinnier the body, the more predatory the fish will be. The sharp teeth and vice-like jaw strength don’t hurt either. Bowfin have a long dorsal fin that spans the length of its back. The fish is also notorious for its black spot at the tail, much like a redfish. However, the most distinguishable trait possessed by bowfin is their swim bladder, which allows them to literally “gulp” air and survive out of water for lengths of time.

Many anglers maintain a severe hatred of bowfin. In fact, I have personally witnessed fishermen who have landed a bowfin kill the fish with a knife or hammer and then discard the body into the lake. Acts such as this are the result of a collective consensus that bowfin simply attack bass by biting them, and then leave the bass with wounds. Many anglers also find that, when a bowfin strikes, their lures are ruined by the fish’s powerful jaws and sharp teeth. While this may be true, it’s not because the bowfin hates bass or even the anglers who seek them, but rather, like most predators, is a territorial and aggressive hunter.

Despite the countless anglers who hate the bowfin, it is actually protected in some states. Pennsylvania, for example, regulates that the fish be immediately released when caught, and anyone caught killing the fish is cited and fined. There are also several organizations that target the bowfin for sport, due to the exciting fight the fish puts up when hooked.

Like the Alligator Gar, the bowfin is literally a living fossil, having existed for nearly 150 million years. Not only that, but the species’ ability to breathe air and survive out of water for periods of time make it a true marvel of evolution. Please, if you find yourself battling a bowfin at the end of your line, treat it like any other catch and release species and see that it returns to the water safely and in good health. There’s no need to kill a fish because of its behavior or its appearance, and the bowfin is no exception.

For information on fishing for bowfin as a sport fish, feel free to visit www.bowfinanglers.com.