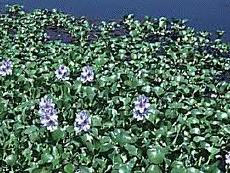 Keeping our waters clean and healthy by doing our part to ensure that harmful elements aren’t lazily left to harm the fragile ecosystem is in important part of enjoying the outdoors. Many will read that and immediately think of gasoline, Styrofoam cups, and any other man-made chemicals or objects that we’re taught to dispose of properly. However, there are plants and animals that, when introduced to a new ecosystem, can wreak havoc upon it. I’ve decided to give readers a little insight on a few such species, starting with a common, but non-native, plant: the water hyacinth.

Native to Brazil, the water hyacinth is believed to have been introduced to U.S. waters via New Orleans during the late 1800’s, and, at present, thrives in the vast majority of Southern states from Florida to California. It has also been found in parts of Illinois, has spread along the west coast, reaching Oregon, and even some parts of lower Canada, and Maine.

The main problem that the water hyacinth brings to waters is that, due to its rapid growth rate (a patch can double in size as quickly as 1-2 weeks), it spreads far and dense, literally strangling waterways and disrupting any ecosystem in which its’ found. This prevents boaters from accessing certain parts of a lake, makes fishing exponentially harder, and overall, makes any water activities in such areas nearly impossible. Furthermore, water hyacinths harm the quality of water, since the thick mats severely hinder the exchange of air and water, which reduces oxygen levels significantly. Finally, the shear density in which water hyacinths grow prevents other plants from growing anywhere near them. Hyacinths block sunlight from reaching other plants, which allows them to completely take over a given area. This ultimately erases an entire ecosystem and leaves only the hyacinth.

Since its swift rise to near uncontrollable levels of growth, there have been numerous techniques employed to dispose of large water hyacinth populations in problem areas. Mechanical harvesters and chopping machines have been utilized in states where the threat is severe. These harvesters remove the plant from the water and then the chopping machines mince the hyacinths into a confetti of bits and pieces. Other practices include the introduction of two species of water hyacinth weevils, which feed on the plant. These weevils have been effective at keeping the hyacinth population under control in several areas.

While it seems that the water hyacinth is nearly uncontrollable, the aforementioned methods of keeping its population down to manageable levels have proven to be successful. Anglers and boaters can do their part to control the spread of water hyacinths by thoroughly cleaning your boat and live-well before leaving the boat ramp to go home. Plant fragments found on or in your boat can find their way into foreign waters, which is the easiest way for the hyacinth to find its way to new locations. As with any potentially harmful element, use common sense to ensure that our waters stay clean and healthy for future generations. Be sure to come back for Part Two of my Invasive Species series, where I’ll cover an acrobatic nuisance, the Zebra Mussel.

For more information on invasive species and what you can do to prevent such organisms from infesting your area, visit your local DNR web site, or visit www.invasivespeciesinfo.gov/aquatics.