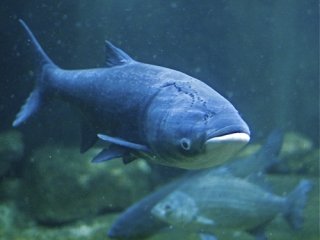 While articles on angling techniques, great locations around the world, and tackle that everyone should keep in their tackle boxes are the main focus of what I do at LiveOutdoors.com, such topics are only a part of what fishing entails. To do my part in conveying the importance of other concepts, such as conservation, safety, and other oft-overlooked facets of the outdoors, I include articles such as my series on invasive species. My coverage of non-native species commonly found in the waters we fish every day concludes with a species that has seen a surge of notoriety these last few years: the Asian carp.

Like most carp species, the Asian carp has a large body, a broad head, and a toothless mouth designed to forage for food. It poses no predatory threat to other fish species, as it feeds mainly on organisms such as algae and plant matter. Asian carp are believed to have been brought to the United States by catfish farmers, who utilized the fish to clean algae from their ponds. However, after flooding, the carp found their way into waterways.

It is the Asian carp’s voracious appetite that causes such a problem in areas where the fish’s population has grown uncontrollable. Furthermore, because they reproduce so rapidly, more and more carp are populating areas and severely damaging the ecosystems. Other species that rely on the same food as the carp are forced out of a given body of water, or simply starve to death.

Not only does the Asian carp pose a threat on the environment, but it has routinely injured boaters throughout the years due to its tendency to leap from the water and collide with people. The carp can leap ten feet out of the water, and their large size has caused black eyes, cuts, and even concussions in the most serious instances.

Efforts to keep the Asian carp’s population in check have included electric underwater barriers to prevent further migration of the species, netting and toxicants authorized by state governments, and the request for the public to catch and consume higher amounts of the species.

The senseless killing of any animal isn’t condoned, at any time, but many outdoorsmen, government officials, and biologists have deemed the Asian carp to be so destructive that eating and trapping large quantities of them is the only way to manage such a destructive fish. Due to their habits, the fish is nearly impossible to catch by traditional fishing methods, and you should always check with your local DNR to obtain as much knowledge as you can about an invasive species and what you can do to help, as well as any licenses you may need to accomplish such a task. So ends my coverage of a few invasive species that have made our waters their homes over the years. Anglers and outdoors enthusiasts alike can help prevent the spread of such species by taking as little from their waters home with them, cleaning their boats and emptying their live wells at the boat ramp, and not adding more problems by being careless with trash or other foreign materials.