The Beauty of Buzzbaits 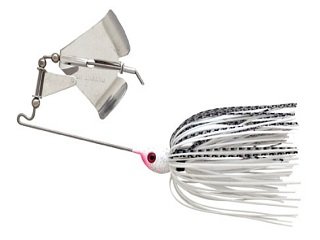 Over the years, I have experimented with many different lures, and I know I’m not alone in that aspect of my fishing life. With so many revolutionary products on the market, it’s hard not to try out new things. However, one lure that I still use each time I hit the water is the very first lure I ever used: the buzzbait. This simple, yet highly-effective bait is a staple in every angler’s tackle box and, if you’re a skeptic or—gasp—if you’ve never used it before, stick around to discover why this amazing lure is so popular.

It’s early morning, the sun is just beginning to peak out from beneath the horizon, and the water is a serene, pane of glass beneath a thin veil of fog. Time to make some noise. That’s where buzzbaits work their magic. Bass are more prone to striking surface lures very early and very late in the day, when—due to the low light conditions—their senses focus more on sound and vibration, rather than color and flash. There’s nothing quite like the chirping of a buzzbait’s propellers over the calm water; at least, until it gives way to the sudden explosion of a strike.

There are numerous factors to consider when using a buzzbait, all of which can help you utilize the lure to its fullest potential. Experiment with different retrieval speeds to find the exact presentation the fish desire. I suggest even trying a sub-surface retrieval utilizing metallic blades, as this will create a major vibration beneath the water. The metallic blades will also create more flash than plastic blades, which only adds to the lure’s appeal. Also, trying out different sizes can lead to surprising results.

Buzzbaits can pull in fish after fish when fished near shorelines, among timber, along weed beds, and especially shallow flats. They can also produce strikes when fished over deeper water, but only if the water is clear enough. Sometimes you may find that the fish are striking, or rolling, on the bait. If this becomes a problem, a quick solution is to add a trailer hook to the lure. Many times, uninterested fish can be enticed with that little extra something that trailer hooks brings to the table.

Several companies offer their own style of buzzbaits to try out on the water, but it’s really up to which one appeals to you, as well as the fish. I’ve always been a firm believer that when it comes to certain lures, the only colors you’ll ever need are white, black, and some variation of chartreuse. My opinion on buzzbait color choice is the same. However, other than color choice, there is also blade number and overall size to consider. Some buzzbaits are equipped with three, or even four, blades, which create more noise and vibration. Some even have blades built into their larger propellers, which revolve in the opposite direction and churn up yet even more water. I also advise picking up a few pond-sized buzzbaits, which are significantly smaller than average buzzbaits, but can do some serious damage nonetheless.

With so many lures to choose from, it’s easy to lose oneself in the variety. I, myself, am guilty of this, and sometimes I need to be reminded of the lures that got me hooked on fishing in the first place. If you find yourself standing in the fishing aisle of your local retailer, your head spinning from the choices in front of you, I suggest getting back to basics and grabbing a few buzzbaits. When you’re out the next morning and the chirp of a propeller is interrupted by the explosion of a strike, you’ll be glad you did.