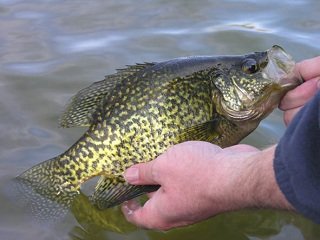 In the fishing world, one of the most popular species sought by anglers all over the country is the crappie, and it’s no secret why. Sac-au-lait, papermouth—whatever you call them—crappie taste great, can be angled in several exciting ways, and, with the right tackle, can put up quite a rewarding fight. There are some, though, who haven’t had the great fortune to fish for crappie and aren’t aware of just how sporting of a species it is. For this month’s Fish File, I steered clear of profiling an exotic species and decided to highlight crappie and why they’re so popular among anglers.

There are two main species of crappie that most anglers are familiar with: black and white. Black crappie tend to possess a far darker coloration than white crappie, due to the dense collection of black spots on their body. White crappie are known for their lighter color, and their sparse spots form a striped pattern along their sides. Also, black crappie prefer clearer water than white crappie. Both species prey on items smaller than themselves, including other fish species, insects, and crustaceans.

Whether your local lake is rolling with subtle waves or covered in thick ice, crappie are readily available to be caught year-round. For this reason, fans of crappie fishing utilize numerous tactics for every season. One of the most popular techniques, which I covered in a past article, is known as spider rigging. It entails several, rigged combos that branch outward from a boat, trailing bait at different depths as the craft slowly moves through the water. Other effective techniques include jigging small plastic baits with the use of longer, light action rods. The long rods allow you to steer clear of the fish as you lightly jig the lures in front of the deeply-situated fish.

Like most fish, crappie are active feeders early in the morning and late at night, but experienced crappie anglers will tell you that lantern-fishing for them at night is a great way to fill the livewell. Several companies make specialized lanterns that can be hung over the side of a boat, or even lowered into the water, to attract all sorts of fish species. As each level of fish on the food chain is drawn to the light, larger species will follow. Then it’s just a matter of dropping your bait—usually a minnow in this case—into the water and going to work. I suggest opting for a green bulb lantern, as green is less attractive to annoying insects.

With light tackle, crappie can be some of the most exciting fish to catch. You can catch multitudes of them in one outing and there are so many ways to prepare them that you’ll never run out of reasons to catch them in the first place. However, there are many anglers who look at crappie as just another panfish, and refuse to “lower” themselves to catch them. It’s unfortunate that some feel this way, but that just leaves more for the rest of us, right?