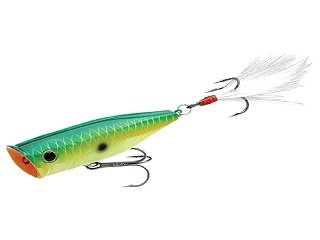 From buzzbaits to torpedoes—and everything in between—topwater lures are the reason for some of the most exciting strikes an angler can experience on the water. There’s nothing like working a lure on the surface and not only seeing, but hearing, the strike of a hungry fish as the water explodes with frenzy. One lure that is especially good at building up anticipation and tension, and one that every serious angler should keep on hand, is the popper.

Unlike some topwater baits, like buzzbaits or Rage toads, poppers are buoyant. You don’t have to work to keep them afloat, which allows you to perfect and alter your tactics when using them. Most are equipped with two sets of treble hooks, though you can find a few models that vary from the norm.

There are a few different ways to fish a popper, but the most common method is to cast the lure out and, once it lands, let it rest in that spot. This is when the majority of strikes occur. If, after landing, the ripples around the lure dissipate without a hit, jerk your rod tip. This action is what gives a popper its action, as the concave nose of the bait churns water with a loud “splooshing” noise. After twitching the rod, allow the lure to rest in place once more. This subtle, “twitch-and-stop” method is very effective. As the popper rests in place, be sure to watch for subtle ripples, as this means a fish is interested and is nibbling. Also, in between jerks, be sure to reel in the slack line. This can mean all the difference should a fish strike.

Another popper technique involves a speedy, but rhythmic retrieve that kicks up water with each burst of velocity. This tactic is highly effective for many species, including bass and especially tarpon, and is a little more involved than other methods, which some anglers enjoy. Alternate between retrieval bursts and slight, downward twitches of the rod tip with this technique, almost like when you use a “walk-the-dog” tactic with a spook, and you’ll entice even the most reluctant of fish.

Several companies make variations of the topwater popper. Rebel’s Pop-R line, Arbogast’s Hula Poppers, Heddon’s Lucky series, and Bass Pro Shops’ XPS series are great choices. They each offer their own styles in a wide variety of sizes and color patterns to suit any condition.

Whether you’re hitting the salty surf for inshore species or making waves in your local pond, topwater poppers are a great way to draw furious strikes from hungry fish. By kicking up water and making noise, poppers tap into the curiosity and predatory instincts of many species and will have anglers continuing to tie them on when things get a little slow on the water.