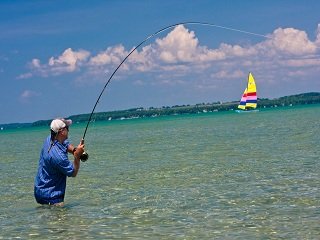 Most anglers hear the phrase “flats fishing” and think of tropical destinations where bonefish and permit prowl. However, even the most experienced shallow water enthusiasts may be surprised to hear that some of the most exciting flats action in the country can be found in the Midwest. The upper reaches of Lake Michigan, along the state’s west coast and upper peninsula, is home to some of the clearest waters in the world. Not only that, but anglers travel from all over the nation to seek out the species that call these waters home. Keep reading to discover why you should consider doing the same.

Michigan’s shallow flats are a popular destination for fly fishermen. This is due to the abundance of carp in the region. While some consider the species to be a garbage fish, fly anglers love them for their tendency to put up an exciting fight, especially when using light tackle. Not only are the carp here plentiful, but they’re big, often averaging around twenty pounds.

However, just as the clear waters present anglers with great sight-fishing chances, they allow the fish to get a clearer view of fishermen as well. Since carp are known for being skittish as it is, it is important that anglers take a stealthy approach and avoid churning up the waters too much when seeking these wary fish. Maintaining focus and utilizing low-profile tactics is crucial, so natural-looking flies, patience, and accuracy are key. Good fly choices here include Hammerheads and Geezus Lizards.

When the temperature drops and the carp aren’t as active, smallmouth bass become the target. While their numbers aren’t as high as they once were in the region, the average size of smallies here is around five pounds. That, along with the rise in the goby population (a favorite meal for smallmouth) has many predicting that a new world record smallie will be pulled from the area’s waters soon.

Another bonus to flats fishing on Lake Michigan is the solitude one finds on the water. More often than not, locations such as the Florida Keys and the Bahamas bustle with water activity, as countless anglers stalk the shallows. However, even on a busy day, you’ll encounter perhaps only a handful of fellow anglers on Michigan’s west coast flats. Not only does this allow a bit of serenity, but it also reduces the risk of someone spooking the fish. Another factor that appeals to anglers travelling to Michigan’s flats is the affordability of the cabins where many choose to stay during the trip. For example, a three-bedroom house in the area rents for around $1000 a week, whereas a similar property in the Keys will be significantly higher.

Anglers looking to find a new place to enjoy shallow water fly fishing this summer would do well to look into the areas around Grand Traverse Bay or Beaver Island. Not only is fishing here affordable, exciting, and challenging, but the off-water activities and laid-back atmosphere of the region only adds to the fun of the experience. Do yourself a favor and look into Michigan’s pristine flats for your next trip and hold on tight after that first hook-up.