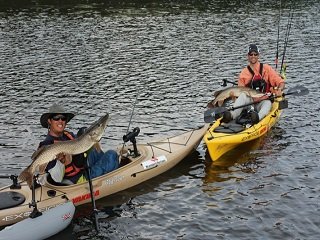 Fishing from a kayak requires a different approach and demands a bit more—physically and mentally—from an angler. These requirements see an increase in necessity when kayak anglers are fishing for larger, more aggressive and unpredictable fish, like pike or muskie.

Balance is important in a kayak, whether you’re fishing or not, and the lack thereof can mean the difference between staying dry or going for an unplanned swim. I suggest any angler looking to take a kayak out for a fishing trip take some time beforehand to become familiar with kayaking and get comfortable with it before adding a rod and reel to the mix.

Preparation is important when fishing from a kayak. Often, anglers worry so much about catching the fish that they disregard their other equipment and things become a chaotic mess. To avoid this, make sure that your tools are out of the way, but still within reach should you need them. I would also forget about bringing a net altogether. Yes, many are hesitant to handle a pike or muskie without first netting them, but in a kayak, you’re so low in the water and close to the fish, that a net isn’t necessary at all.

What do you do once you’ve got a strike? The trick to pulling a pike or muskie to the kayak is allowing the fish to wear itself out during the fight. You don’t have a stable anchor point on which to stand, such as solid ground or a fishing boat, so you’ll need to do all you can to stay balanced. In a kayak, some anglers accomplish this by hanging both legs over either side of the craft.

Once you’ve worn the fish out and managed to get it to the kayak, don’t let your guard down. Pike and muskie are notorious for thrashing wildly when being handled and, in a kayak, where you’re up close and personal with the business end of such predatory species, anglers must execute great caution and patience when handling them with their bare hands. First and foremost, to protect against accidentally being hooked yourself, be sure to keep a good length of slack line between your rod and the fish. The last thing you want is a lure sling-shotted into your skin. Secondly, the key to controlling an unpredictable fish is controlling its head, and to do this, you’ll need to grip it by the gill plate. In order to effectively accomplish this, first you’ll need to curl all four fingers of your hand into a U-shape and slip them under the fish’s right gill plate. Then extend your right thumb forward, parallel to the fish’s head. Next, you’ll need to squeeze your fingers towards your thumb to get a firm grip. By utilizing this grasp, you can safely handle the fish with minimal damage to it and yourself.

Always remember to support the fish’s body with your other hand when lifting it from the water and try to make sure you don’t keep it out of water for too long. Muskie and pike may not be the most attractive fish, but they’re living things nonetheless, and deserve our respect. I urge any anglers who enjoy kayaking to take the craft out to their local river or lake the next time they go fishing and see what kind of excitement kayak fishing can bring.