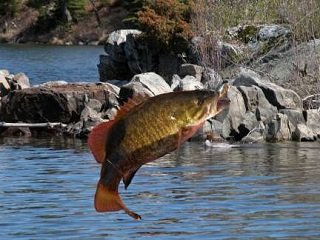 Bronzeback. Smallie. Red-eye. You guessed it; today’s Fish File shines its light upon one of the most sought-after and well-known species on the water: the smallmouth bass. No matter what you call them, smallmouth bass are considered by many to be, pound-for-pound, one of the hardest fighting species. Now, there’s not much I can write about smallies that avid anglers of the species don’t already know, but even the most seasoned fisherman will want to read on and find out what makes smallies tick.

Smallmouth bass possess a reasonably distinctive appearance. Commonly displaying a brown, but sometimes brighter gold, body, smallies are marked with dark vertical bands along their sides, much like a tiger, instead of a noticeable lateral line. The fish is most well-known, though, for its trademark red eyes. The difference in overall color hue is due to where the fish are found. Smallmouth are known for inhabiting rivers, as well as lakes, and those fish who call the darker waters of the rivers their home tend to be darker and more streamlined than their lake-dwelling brethren.

Smallies tend to prefer clearer waters than largemouth, and their territory often includes sandy or rocky bottoms, reservoirs, and streams or rivers. They also prefer cooler temperatures. Furthermore, smallies are rather intolerant of pollution, so their presence can be a gauge of the water quality of a particular lake or river. Like largemouth, smallies are predatory, and their prey includes crayfish, small animals, insects, and other fish.

Anglers love smallmouth because, even though they don’t grow as large as some other species (most weigh around two or three pounds), they are one of the hardest fighting fish out there. Fishermen use conventional freshwater tackle to entice smallies. Effective lures include spoons, grubs, spinnerbaits, soft plastic leeches, buzzbaits, jerkbaits, crankbaits—normal bass tackle. Fly fishermen also have great luck with nymphs, streamers, and crayfish or leech flies.

Medium-fast action rods of around 5 ½ to 6 ½ feet long are popular choices for smallmouth anglers. G. Loomis, a popular rod making company, produces a series of rods designed for smallmouth fishing, called Bronzebacks. Though the company’s rods are more expensive than the casual angler may be used to, but they’re incredibly high quality products and well-worth the investment if you are an avid angler. Pairing such a setup with 4 to 8-pound test line makes for an exciting fight once a smallie is hooked. Fly fisherman seeking bronzebacks often do so with a 5 to 9-foot rod ranging from a 5 to 8 weight size. Whichever you use, try to use a sinking line, as smallies tend to congregate at deeper depths.

We all have our favorite species to fish for, especially during the warm summer months, but smallmouth bass are a fun species to seek out when the temperatures begin to cool down. Bass fishermen who lean more towards largemouth don’t even have to buy new tackle should they decide to go after smallies. Smallmouth are fun to fish for and require a little different approach, which is always exciting. Just be sure to hang on and prepare for a good fight when you hook into one.