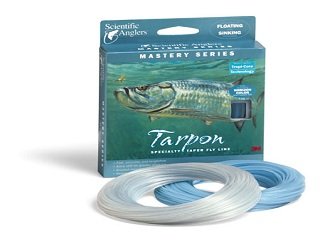 In Part One of my guide on choosing fly line, I delved into what fly line consists of and described a little of how each line weight is rated. Today, in Part Two, I’ll give you an insight into how line tapers work, what role sink-rates play, and how to read the seemingly coded packaging on the fly line boxes so that you know you’re getting the right line for your purposes.

We’ll being with what’s known as a “taper,” which is a fancy way of describing how a fly line thins out. A fly line’s taper plays a large role in its casting characteristics, as well as its roll and turnover. There are three basic variations of a line taper: level, double, and weight-forward.

Level lines, as their name implies, possess no thinning qualities and are even throughout their entire length. They are the simplest, most basic, type of line and, while they’re easy to use, aren’t very effective and aren’t popular choices for casting.

Double-taper lines possess a taper at both ends, which is optimal for roll-casting due to the fact that the middle of the line is where the weight is concentrated. A nice quality of double-taper lines is that you can reverse the line after a period of time and use the opposite end, which doubles the life of the line.

Weight-forward lines are considered the best choice for fly casting. This type of line is thickest along the first third of its length, which gives anglers the ability to cast further. They also taper to a thin diameter right at the tip to allow for a more delicate presentation of the fly.

While many fly liens float to accommodate dry flies, sometimes a wet fly is preferred. This is where sinking lines come into play. There are two types of sinking fly line: sinking-tip and sinking. With up to around 15 feet of their tips designed to sink at a certain rate, sink-tip lines possess a floating body. Sinking lines are designed to sink deeper, sometimes up to 20 feet, depending on your desired depth. Such lines come with their sink rate on the packaging. A sink rate of 1 sinks at around ½ to 1 ½ inches per second, whereas a line with a rating of 2-4 sinks around 1 ½ to 4 ½ inches per second. Each level of sinking rate adds another inch or so of depth per second, so keep that in mind when choosing any type of sinking line.

With all these ratings and weights that play into fly line options, you may be wondering how manufacturers fit the information on their packaging. Well, there is an abbreviated system that concisely breaks it down so that you see all the factors a line may possess. For example, if a package reads “DT-4-F,” this means that it is a double-tapered, 4 weight line, and floats. If it reads “WF-6-F/S,” then you should know that it is a weight-forward, 6 weight, floating line with a sinking tip. It may take time to get it down pat, but this system is very easy to understand and will make your fly line shopping much quicker.

Choosing a fly line isn’t all that hard, and if you’re heading to a specific destination for a specific species, like tarpon, there are even species-specific lines that take all the guess work out of the decision. I always suggest choosing the best line you can afford. Not only will it last longer, but it will cast and perform better, which makes any day on the water that much more enjoyable.

SHARE
TWEET
How To
previous articleThe One Thing To Never Leave Home Without
next articleTaxidermy Tips: How to Care for Your Trophy
Overture-undertone navbar fix
Monitoring string
monitoring_string = "68ec033d54c4f3b1ca4aca7f4c1e01ca"
a