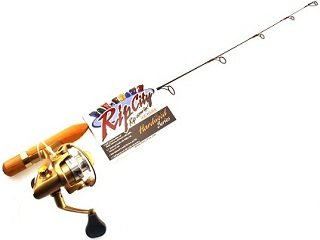 With winter steadily approaching, ice anglers will undoubtedly be setting aside some time to review their current gear and decide what needs to be replaced this season. Furthermore, those anglers who tried ice fishing for the first time last season, used their buddies’ tackle, and were “hooked” on the sport, might want to pick up their own gear this winter. Well, any anglers looking to bulk up their tackle collection this winter are in luck. Today, I begin a four-part series on what you’ll need for the ice this season, starting with a general buyer’s guide to the rods and reels associated with the sport.

The first thing many notice about ice fishing rods is that they’re tremendously shorter than regular fishing rods. In fact, most ice rods measure anywhere between 12 and 30 inches in length. Now, it’s not uncommon to see anglers utilizing their normal gear on the ice, as in a 6-foot rod that they would normally use for panfish. However, using a rod of such length on the ice limits you to outside use, as in, the rod is too long to be used in the warmth of a shanty. The shorter rods will allow for a lighter touch, which is useful when seeking sneaky panfish, while longer ones are designed to muscle larger fish through the ice quickly.

Action does come into play, as well, when considering an ice rod. Sometimes, a shorter ice rod will still maintain a heavy action. Such a rod is designed for confined spaces when the target is larger fish. There are ice rods that are extremely light action, and make for an exciting fight when perch or bluegill are what you’re after.

When it comes to reels for ice fishing, there aren’t many stand-alone reels sold individually. However, you really only need the smallest model of a particular reel to get the job done on the ice. There are a few ice fishing reels released around early November, though, and if you head to your local outdoor retailer this season, you’ll be sure to find one or two. If you’re interested in making ice fishing a seasonal activity, though, I’d suggest spending a little extra money for the smallest model of a nicer reel, such as Pflueger President or even the Bass Pro Microlite.

For those anglers who are still on the fence, and want to test the waters a bit more before committing their time—and money—to another type of fishing, ice combos are as plentiful as the ice itself. Starting right around the end of October, many retailers will carry ice fishing rod and reel combos from a number of companies, and in a variety of lengths and actions. Many of these combos also come with a small starter pack of lures. Such combos are ideal for beginners, seasoned veterans looking for a reliable addition to their arsenal, or ice anglers who want to have extra setups on hand for when friends accompany them to the ice.

Ice rods are available from numerous companies. St. Croix, for example, offers ice versions of their Legend and Premier rods, and even has a Premier ice combo. You’ll find, though, that many ice rods are not equipped with a reel seat. This is very common, and you’ll often see reels attached with electrical tape to the rod handle. If you’re just starting out, or looking for an addition to your ice tackle, keep the aforementioned information in mind this season, and come back for some quick tips on lures and line.