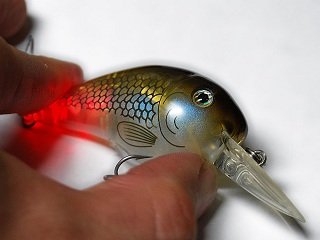 The world of fishing is not without its own trends and gimmicks, some of which clearly do a great job of hooking the fisherman instead of the fish. Over the years, many products have disappeared from memory as quickly as they arrived, due to their sheer inefficiency. However, there are products released that are so effective that they raise questions regarding morality and sportsmanship on the water. One such product, that has been the topic of debate since its mainstream debut a few years ago, is the lighted bass lure.

Rather than take a side in the debate surrounding lighted lures, I’ll provide you all with a breakdown of the popular likes and dislikes many anglers hold for them. I’ll never tell anyone what to buy, so I hope that, by offering valid points on both sides of the debate, you’ll be able to come to your own conclusions regarding the lures.

Lighted lures bring to the fishing community many advantages. Most, like the Laser Lure brand, consist of high-quality materials and construction and the internal lights are designed to last several hundred hours. Also, the Laser Lure brand offers a variety of lure types that are equipped with internal lights, so consumers have numerous options for several situations.

There are a few drawbacks to lighted lures, however. Firstly, they tend to be quite expensive. The Laser Lure brand, for example, costs around $20 for a lure. Such a high price tag causes many anglers to hesitate even throwing them. Furthermore, with any product, a rise in popularity brings with it several low-budget products that try to cash in on the boom. Be wary of cheap lures should you want to try out a lighted lure.

One trait of lighted lures, which I’ve decided qualifies as both pro and con, is their efficiency at catching fish. The reason this quality is both bad and good is that it is the single most discussed topic in the lighted lure debate. The technology and design of the lures has enabled them to become the world record holder for catching fish. However, this has caused many to consider them immoral, unfair, and unsportsmanlike. The lures have even been banned in a few states for this reason.

Even though lighted lures have only recently seen a surge in exposure, they’ve already become the topic of many arguments—and even regulations—throughout the country. It seems that each individual carries his/her own opinion of the lures, so it really comes down to how you, as an angler, feel about using them. Are they unfair to use or are they just the next step in the evolution of the sport? The choice is yours to make.