Perch Through the Ice 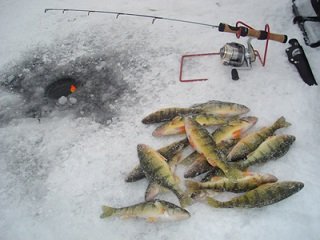 It seems that each ice fisherman has his or her favorite species to target each winter. For some, walleye are well worth the fight while others yearn for daily limits of bluegill. Still, there are many anglers who simply can’t get enough of perch. If you have a craving for perch this winter, keep reading to learn how you, too, can go home with a cooler filled with these striped beauties this season.

As is normal with fishing—and also a little more difficult through the ice—locating the fish is your first step. Ice fishing isn’t like casting swift crankbait from the boat to cover a lot of water, however, and can sometimes require drilling several holes or moving just a foot in a given direction to get your bait where the fish are holding. Locations where you should seek out perch will vary as winter progresses. Early in the season, try to stick to shallow bays and points where vegetation is scattered. As the season continues, target deeper holes and bottom structure. Before the ice melts completely, you’ll want to move shallow again to locate fish during their prespawn activity. Basically, you’ll want to try to stick to sparsely weeded shallow areas early in the season, move deeper and try to locate structure in the middle of the season, and then move shallow again to capitalize on prespawn perch as spring draws near.

Once you find the perch it comes time to drop a lure down and hook into one. This isn’t too taxing, as perch feed aggressively in the winter. Many ice anglers use tip-ups and drop a rigged minnow near the bottom with the assistance of a split shot. Some like to add beads or spinners as well, to create more of a flash as the minnow moves. If the perch are aggressively striking minnows, you can also tie on minnow-type lures, like a Rapala Jiggin’ Rap, so you don’t blow through your bait supply so quickly.

It’s also important to do your best to mimic the local forage that the perch feed upon in whatever body of water you happen to be fishing. For instance, if they’re feeding on larvae, try using a small jig tipped with a maggot or wax worm. If you are using live bait as opposed to lures, always try to use the freshest bait possible, especially since there will be times when the perch are biting light.

The jigging styles commonly used for panfish will work well for perch. For example, when they’re suspended, a trembling lifting motion, followed by a slow drop will produce results. Prepare yourself as you lift the bait, as perch tend to strike as the bait rises. When the perch are settling near the bottom of muddy flats, dropping your bait all the way to the bottom, then gently lifting it up and down to kick up dirt and other debris is an effective tactic. This resembles a fish that has discovered food, and other perch will charge in to take advantage of that.

Ice fishing is about locating the fish, using any number of techniques, and then involves some trial and error to figure out what they’re interested in. Often times, ice anglers will try a spot, fish for 15-20 minutes, and if they don’t get any bites, they move on to a different spot. If you’re fishing a local lake, try to remember where key locations from when you fished in the spring and summer, and return to those spots in the winter. Ice fishing isn’t as random and spotty as some make it out to be, and if you can just pay attention and remember where to look, you’ll do just fine this season.