The Ins and Outs of Tip-Ups 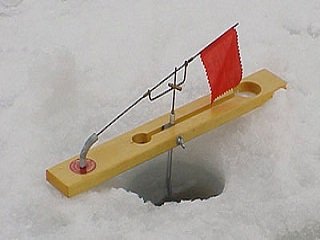 For some, ice fishing is a new endeavor. For these anglers, borrowing gear from your buddy will suffice for a day on the ice. However, serious ice fishermen want to fill their cooler with fish and know the best way to do so is to drill several holes and cover as much water as possible. On the ice, the most conventional way to accomplish this is to utilize tip-ups. I’ve talked with several anglers over the years about ice fishing and, surprisingly, many of them are more than a little intimidated by tip-ups, which is completely understandable. More often than not, those new to ice fishing will take one look at this wooden contraption that unfolds in weird ways, has a flag, and is loaded with some line, and opt for a rod and reel, confining their efforts to one hole in the ice. If you count yourself as one such individual, keep reading for a crash course on these devices and how they work.

The basic concept behind the tip-up is a main body piece that rests over a hole in the ice and supports a length of line. When a fish strikes, this trips a mechanism that causes the flag to flip upright, signaling when there is a fish on. It is then the angler’s job to approach the tip-up, pull the line to set the hook, and then pull the fish through the ice, hand over hand. The wooden models consist of two connecting bars that support a centerpiece. This centerpiece is equipped with a reel that holds a length of line, usually Dacron, and leader line with a baited hook. While this model is the most traditional and the least costly, they often freeze up and there is no way to adjust the tension.

Over the years, technology has evolved, and different styles of tip-ups have been introduced to the market. Thermal, underwater, and winding tip-ups offer anglers different choices on the ice. Thermal tip-ups consist of a flat, circular design (like a dinner plate)—available in several diameters—and completely covers the hole. This reduces the chance that snow or other debris will fall into the hole and also prevents it from freezing over.

Underwater tip-ups are made up of a rectangular main body that rests on the ice and supports a centerpiece. This design is similar to the wooden model, except that with an underwater tip-up, the reel is directly connected to the main shaft, as well as the flag, so the flag is immediately released when a strike occurs. This model does allow some snow to enter the hole, however, and the cylinder around the tripping mechanism is prone to freezing.

Winding tip-ups consist of a tall, upright main body that supports an arm piece. The arm is outfitted with a length of Dacron line, hook and bait on one end, and a flat plate on the other. The line feeds through a hole in this flat plate and into the water, where a steel plate is bent over the reel. This steel trips the flag when the reel is turned, indicating a strike.

Some tip-up models are a little more cumbersome than others, which is a factor to take into consideration should you decide to pick some up. However, if you’re using a sled, this really won’t make a difference. If you’ve tried ice fishing once or twice, and think you might keep doing it, then a few tip-ups are a great investment, especially if you’re in it for the filets. It’s like having a small army of fishing buddies with you on the ice!