Ugly Stiks: We’ve All Been There 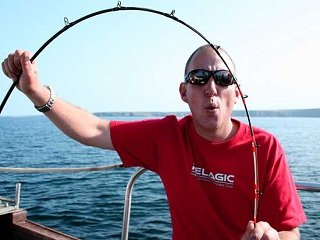 We’ve all been there; that point during our fishing experiences where we’ve been on the water several times with a cheap combo and decided to take the next step and get a little more serious about our tackle. For the vast majority, this usually involves buying a reel—often an Abu Garcia Cardinal or Pflueger Trion—and, of course, an Ugly Stik. Heck, my first combo was a bubble-packed Shakespeare Catera spinning reel and an Ugly Stik (a combo that I still have, and even use now and then). There’s nothing wrong with using an Ugly Stik. In fact, these rods, made by Shakespeare, are very efficient and come in a variety of styles to suit nearly any need on the water. What makes them so popular among anglers, though?

Easily the most appealing aspect of Ugly Stiks is their low cost. They start off around $30 for the freshwater models with a foam grip, and move up from there. Once you get into the trolling or steelhead models, the price increases a bit. This low cost is what helps anglers at this level because it allows for them to spend a little more on a high quality reel and still gives them the assurance that they have a sturdy rod. They may want to upgrade from an Ugly Stik in the future, but saving money on the initial setup and grabbing a nice reel allows them to keep that reel for their next rod if they so choose.

There are a lot of Ugly Stik models on the market. In fact, it’s pretty much impossible to find them all in one place at one time, due to the region in which the retailer is located. They all consist of a graphite core, surrounded with a layer of E-Glass, aluminum oxide guide inserts, and are made in the USA. There are the foam grip freshwater models to which most are accustomed, but from there, the myriad of styles is astounding. You have the next step up, the Ugly Stik Lite, which is equipped with a cork handle. There are salmon and steelhead models, trolling models, catfish, and even split-grip inshore rods, as well. Each model is available in several lengths and actions.

If you’re familiar with Ugly Stiks, or have seen any of the product’s commercials, then you’ll know that they’re known for being virtually “indestructible.” Supposedly, you’re able to bend the rod from tip to tip without I breaking. I don’t advise testing an Ugly Stik’s durability in this manner, but I have used many in the past and have seen them bend to extremes that would snap other rods, so I can attest to their durability. The rods also come with a 5-year warranty, which is a comfort to many users.

We’ve all used an Ugly Stik at one time. This is a fact. As I said, I still have mine and have used it regularly throughout the last ten years or so. While they may not consist of 90-million modulus graphite, or have a floating reel seat, they are quality rods that appeal to anglers who are at a transition between casual and serious fishing.