Why are Strike King’s Rage Plastics so Popular? 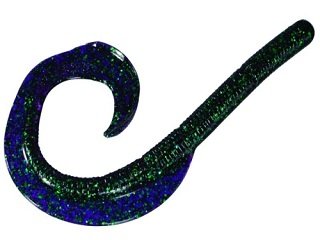 When it comes to fishing, everyone has their own preferences when it comes to lures. Some prefer a particular color pattern, others a certain scent, and there are those of us who only buy a particular brand or series of baits. I definitely have a few lures and baits that I prefer over others, due to good luck with them in the past, but I also like to think I’m open to trying to new lures when something new hits the market. However, one type of bait that I love, and I know others love as well, is Strike King’s Rage Tail plastics. What makes the Rage Tail line such a favorite among the fishing community, though?

Strike King is a manufacturer that needs no introduction. When it comes to the fishing world, the company is a legend. Their baits have proven to be effective on the water for years and continue to do so with each new product. The Rage Tail series is no exception to this. Not only does the series incorporate Strike King’s coffee-scented plastic (a favorite scent among fishermen), but the sheer variety of baits within the series is enough to get any angler excited. The best part is that the baits don’t just differ in body style or color, but in action and application on the water. For instance, the Space Monkey is primarily a flipping bait, while the Toad and Shad are topwater baits designed to be worked like a buzzbait. Furthermore, the company continues to introduce new designs. This eagerness to increase variety and utilize knowledge and technology to create the best impact on the water for anglers is what sets Strike King apart from many other companies.

I’ve mentioned the term “design” a few times in relation to the Rage Tail line, and those of you who’ve never used the baits might be wondering just how their design differs from other baits on the market. Strike King really aimed to produce a different action with the Rage baits, which is evident by the thickness and exaggeration of the tails, claws, and other pieces of each style. For instance, the Rage Shad is a topwater bait that has a main body like a topwater frog, but a single, thick tail fin that creates A LOT of noise and upturned water during the retrieve. This thick design increases resistance in the water and makes fish go crazy. One other bait in the series, the Anaconda worm, possesses a very long ribboned tail, which is longer than conventional plastic worm tails, and has more erratic movements in the water.

Recently, Strike King has even gone the extra mile, in terms of quality in their baits and providing customers with the best. The baits now come packaged in molded plastic cases, which keep them safe and shaped during shipping and manufacturing. Also, there are now small plastic tabs that keep the legs and other free-moving parts attached to the main body, which also helps maintain integrity during the shipping process. Such practices, along with attention to detail, impeccable performance on the water, and really listening to what customers are looking for in their baits, are what create a loyalty to a brand. Strike King’s Rage Tail series accomplishes this is the best ways possible. If you’ve never used a Rage Tail bait, do yourself a favor and pick up a few styles this season. I promise you won’t regret it.