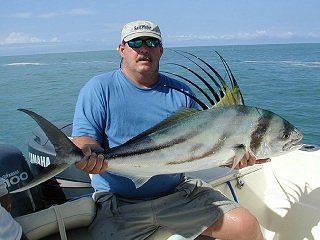 If you’ve ever taken a moment to check out some of the different species of fish out there, I mean really look at them, you’ll discover that there are some very unique fish in the waters of this world. I, myself, am forced to take a second glance at species such as the paddlefish, with its long, sword-like snout. However, for every fish that’s odd in appearance, there are several that are quite stunning, both in physical traits and demeanor. One example of such a species is the roosterfish, the subject of this month’s Fish Files.

Native to the eastern Pacific coast and found sometimes near the Galapagos Islands and even inshore around the Gulf of Mexico, roosterfish get their name from the thin spines that protrude from its back and stand straight up when the fish is excited or agitated. Its broad, powerful body is adorned with two dark stripes that span across the fish’s silvery torso.

Roosterfish generally stick close to shallow waters around shore where they can forage easily for food. Their shallow water habitat often affords anglers a view of the fish’s spine breaking the surface as it searches for food. On average, roosterfish tend to weigh around 20-pounds, but can reach lengths of four feet.

A popular gamefish, roosterfish aren’t generally considered to be good for eating, but those seeking to reel in a few can go about it a few different ways. From the beach, fishermen can cast out to the surf, where surface lures like poppers or spooks work well. Anglers casting from a boat will want to cast towards shallow water. Trolling has also proven to be effective, especially along shallow inshore areas or around points and reefs. Live bait, surface lures, and strip bait are just some of the methods anglers use to pull roosterfish to the boat. If you maneuver your boat into the shallow waters near shore to cast, be sure to pay attention to the waves and your position, as a careless angler may find their boat stuck in shallow water suddenly. If you find a group of roosterfish, be ready to set the hook at any second, as they are very competitive and will fight over a lure or bait, especially a surface lure.

Roosterfish are very aggressive when striking a lure, so aggressive that they often miss the first one or two strikes. Keep reeling if this happens and the fish will continue to follow the lure until it successfully grabs it. They are known as fierce fighters when hooked and, like most saltwater species, are quite powerful and will often run early, causing your line to scream off the reel while they jump and battle.

I’ve hooked into one or two roosterfish while fishing for redfish in the Gulf and I can tell you that they are not a species to be taken lightly. Watching that spine slice through the water as the fish hones in on your lure is just as exciting as the fight itself. If you ever get the chance to fish near the coasts of Mexico, I highly suggest taking some time to locate a group of roosterfish if you can. While they may not be the best choice for the dinner table, they are one of the most engaging and exciting inshore species to fish for.