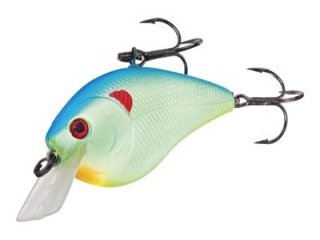 Crankbaits are pretty much a staple in every angler’s tackle box, and with good reason. They have great action in the water, their bills allow them to bounce off structure and peak a fish’s interest, and their treble hooks go a long way towards assuring a solid hook set. With such great features, where is there any room for change, let alone improvement? Well, Backstabber, a company that manufactures quality crankbaits, recently released a lure that takes the timeless design of the crankbait, but switches one key feature while improving another at the same time. This bait is known as the Stabber crankbait.

When you first look at the Stabber lure, you might think that there’s something just a little off about it. Well, the feature of the Stabber that makes it different from conventional crankbaits is also the one feature that allows it to stand out among the other baits on the market. Normally, crankbaits feature two treble hooks—one on the tail and one on the belly—but where the Stabber differs from this design is that it takes the treble hook on the belly and places it on the bait’s back, or top. This reduces the risk that the bait will snag when fished over weeds or other wayward objects, and also increases the percentage of solid hook sets.

Aside from moving a treble hook from the bait’s belly to its back, Backstabber also designed each treble hook to able to swivel a full 360 degrees. This feature makes it more difficult for a hooked fish to shake the lure from its mouth, as it enables the hooks to move and rotate with the fish as it fights all the way to the boat.

The Stabber lure is available in three styles—lipless, square-bill, and standard crankbait—in two lengths, two weights, and seven different color patterns. They are on the more expensive end of the market ($14-$15), which can cause those interested in trying them out to think twice about their purchase. Furthermore, the lures are quite new, which will make finding reviews a bit difficult.

The Stabber lure from Backstabber brings a few changes to an old favorite. By changing the treble hook location and enabling the hooks to swivel completely, the company’s aim is to reduce the number of lost fish and enable anglers to increase their catch rate significantly. With three styles from which to choose, each of which is available in several colors, lengths, and weights, any angler would be hard-pressed to not want to pick one or two up this season and give them a try.