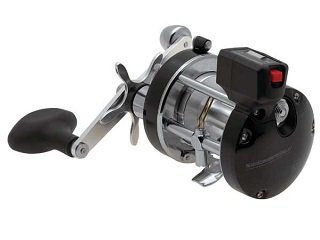 Trolling is a technique that any angler can utilize when they’re fishing their favorite lake. After all, anyone can pull a crankbait or spinnerbait behind while they slowly maneuver their boat around the water. What if you want to troll your bait a little deeper, a few hundred feet deeper, to be more specific? Well, if deep depths are where your target species resides, then you’ll need to pick up gear designed for such an endeavor. Like any new gear purchase, however, shopping for a trolling setup can be a little overwhelming without some help. Not to worry, though; below, you’ll find a crash course in buying a rod and reel for your next big water outing.

A quality reel makes all the difference when you’re on the water, trolling or not, but the large profile reels used for trolling are equipped with specific features that make an angler’s day a lot less frustrating. The basic design of a trolling reel hasn’t changed, but current models possess a few different features that set them apart from each other. For example, most trolling reels are designed to hold several hundred yards of heavy line. More expensive models are equipped with either a manual or electronic line counter, which displays how much line is in the water and provides anglers with a more accurate idea of their bait’s depth in relation to where the fish are suspending. Even if your reel doesn’t have a line counter, you can pick up a model made by Shakespeare that attaches to the reel. Also, a bait clicker option is available on most trolling reels, which clicks loudly when line is being taken out by a fish and notifies the angler of a strike.

For larger fish, a reel with dual-speed capabilities is a good idea. Having a reel with such a feature will give anglers the option of switching to a faster speed and bringing in line quicker when a large fish makes a run at the boat.

Trolling rods are actually a fairly easy purchase, as there are really only three different styles: standard eye, roller eye, and inner-flow. Whichever type you opt for, make sure you pick a rod that’s strong enough to withstand the initial strike of a large fish, as well as the fight that will ensue. Of course, you should also choose a rod best suited for your region and target species. For example, fish with delicate mouths will require a longer rod, as the length will usually afford some flexibility and take strain off the fish. For waters where epic fights occur, rods with roller guides are optimal. These guides reduce friction on the line during a long fight or when the rod is bent under the strength of a powerful fish, but the higher cost isn’t necessary if you’re not targeting a powerful species. There are also rods known as inner-flow rods, in which the line actually feeds through the interior of the blank itself, reducing all stress points.

Now that you have a little better understanding of the basics of trolling rods and reels, you’ll undoubtedly be more comfortable with picking up a setup for your deep water needs. As with any new rod or reel purchase, the important things to consider are your target species, how often you’ll be using the gear, and how much you want to spend. Hope the rundown of the ins and outs of trolling rods and reels helped, and be on the lookout for a breakdown of the lines and bait used in trolling in the future!

SHARE
TWEET
previous articleChoose a Taxidermist, Not a Hackidermist
next articleKeep Fish Alive and Well in the Livewell
Overture-undertone navbar fix
Monitoring string
monitoring_string = "68ec033d54c4f3b1ca4aca7f4c1e01ca"
a