Keep Fish Alive and Well in the Livewell 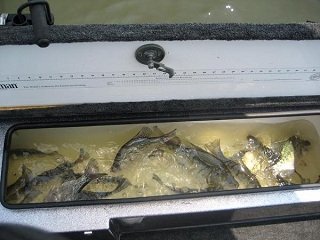 An unwavering respect for nature is a vital characteristic for any angler. This can mean everything from keeping the waters clean to implementing proper handling of the fish we pull from them. Whether you’re planning to eat your day’s catch or show it off at a tournament weigh-in, it’s important to keep the fish healthy while they’re in your possession. Tournament anglers and weekend warriors alike will need to take the necessary steps to ensure that any fish in their livewells are healthy and cared for, and there are a few ways to accomplish this.

The first step in ensuring your livewell fish remain healthy is filling the livewell at your first stop on the water. This is a key practice, since the lake will be cooler in the morning than later on in the day, and also better aerated. When you do this, just be sure to use water from open areas, free of too much vegetation or sediment. Next, you’ll need to turn on the aerator and set it to run all day. If it uses a timer, set it run as often as possible.

After preparing for fish by setting up the livewell and aerator, you’ll need to make sure you handle the fish you catch properly. When you land a fish, be sure to grip the fish gently, but firmly, by the jaw. You don’t want to break the fish’s jaw, but you also want to hold it securely enough so that it can’t break free and harm itself. When you hold a fish by the jaw, you’ll need to support it with another hand under the belly. Also, be sure to wet your hands before handling the fish, as dry hands will remove the protective coating that some call “slime,” but actually protects fish from harmful elements. If you’re using a net, try to use one made of soft rubber, or one that’s knotless, so that it doesn’t do any further harm to the fish. Lastly, if you practice catch and release, or just don’t plan on keeping a given hooked fish, try not to keep it out of the water any longer than you can hold your own breath. Remember, fish need water to breathe and each second out of the water is like choking.

Now that you’ve got a few fish in the livewell, it’s time to keep them healthy and comfortable during their stay there. It may not seem like a big issue, but cruising around big lakes at top speeds can be rough on fish, especially ones in the front livewell. The front of the boat bounces more in rough waters and fish in the front livewell endure harsh ride.

Livewell temperature is also something to consider and carefully monitored. The 75-degree mark is integral, in this case. When the waters dip below that mark, add fresh water to the livewell often, and when it gets above that mark, recirculate the water. Furthermore, if you need to cool the water in your livewell, add a block of ice, as it will slow the fish’s metabolism, as well as cool the water. Extra diligent anglers can also add non-iodized salt to the water (1/3 cup per five gallons of water). This will keep the electrolytes balanced while reducing stress on the fish. Finally, be sure to drain half your livewell water every few hours and refill it with lake water. This will remove carbon dioxide and ammonia that will build up.

While it may seem like a lot to take in, the precautions listed above are habits that become good practice on the water, and don’t take up a lot of time or even thought to implement. Keeping fish alive is just one of the many ways outdoorsmen show their respect and love for not only the sport, but the outdoors in general. In order to ensure that future generations can enjoy the waters, we must do our part, here and now, to maintain healthy ecosystems. Besides, nobody wants to pull a dead fish from the livewell; just ask any tournament angler who’s done so in the past.