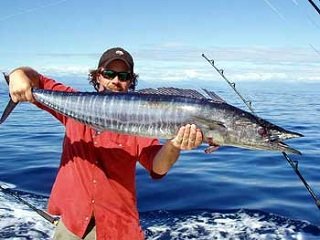 There are instances when the only thing keeping some anglers from pursuing certain species is simply a lack of knowledge about it. While it’s true that one can’t simply just take their bass gear out to hook into a grouper, it doesn’t mean you have to never know the feeling of catching one. This is why I highlight a specific fish each month and hope that a little knowledge of each one will help break down that last little barrier that keeps some anglers from taking the next step towards a prize sport fish. Today’s Fish File highlights one of the most highly-sought saltwater fish, and also one of the tastiest: the wahoo.

Take one look at the wahoo and you’ll know instantly that the fish is built for speed. With its long, slender body, sharp teeth, and iridescent blue striped patterns, this is clearly a predator with immense speed and power. Wahoo have been known to reach lengths over seven feet and can easily reach speeds over 50 mph in the water, which makes them a predator not to be taken lightly or underestimated, especially when hooked. They feed on smaller fish and other marine life, which makes live bait and lures favorite tactics among anglers.

This speed and strength that the wahoo possesses is half the reason why anglers seek it out so often. You don’t have to go too far from shore to hook into one, which appeals to many fishermen, and their aggressive nature provides amazing strikes, with challenging fights. Wahoo tend to break on a charging run right off the bat, and on light to medium tackle, this fight is one not to miss.

Due to their hard mouths and teeth, keeping a wahoo hooked during the fight is a difficult task. You can use large saltwater lures to entice them, but you’ll want to be sure to use strong leader of at least four feet in length to withstand the shock of the initial strike, as well as the risk of the fish’s teeth. If you want to go with live bait, mullet or pogies work well near structure. During spawning season, try to keep your baits and lures around 15 or 20 feet, as wahoo maintain such depths during that time. You can also have success trolling for wahoo, but when wahoo are situated deeper, the water tends to get murkier, so you’ll need to set your downrigger deep and work upward until a hook-up is made.

The other half of why anglers seek wahoo is that they’re one of the best-tasting fish in the ocean. Combine such a prized fillet with the sheer power and excitement that wahoo bring to any fight, and you pretty much have the perfect saltwater fish. I know many avid saltwater anglers who take trips to target wahoo specifically, and have fiberglass replicas mounted at home to prove it. If you’ve never had the opportunity to hook into a wahoo before, and are looking for a challenge on your next trip, then I highly suggest chartering a guide to help you land one of these monsters. I promise that, once you feel that first, powerful run, you’ll be hooked.