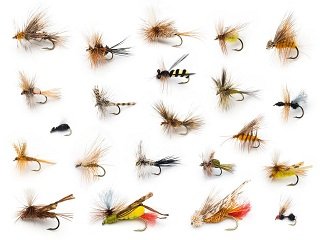 If you ask a seasoned fly angler to tell you about the differences in flies, be sure to have a comfortable seat nearby and settle in for the long haul. Not only are there different styles, but the subtle, even seemingly unnoticeable, differences in some flies—size, color, weight—will make for a lengthy conversation, to say the least. While a conversation with a fly fisherman is always interesting, informative, and even pastoral, it also helps to know a little about the intricacies of flies yourself. Today, I’ve provided you all with a breakdown of the different fly types, as well as some examples of tried and true flies in each category.

I’ll start by classifying flies into four categories: dry, wet, nymphs, and long flies. Much like any good bass fisherman should have a variety of lures in their tackle box, any good fly fisherman will have a good selection of each fly category on them when they hit the river. Let’s face it, there are so many variables in fishing—weather, water clarity, climate, season, water temperature—that factor into what bait to use, and none of those compare to how the fish are feeling on a given day, so a wide selection of options is just smart.

Dry flies are, as their name implies, intended to float at the water’s surface, imitating an insect and enticing trout to strike. There are hundreds of variations of a dry fly, but some that have proven to be effective consistently are the Adams, as well as the Parachute Adams, which many swear by, the Griffith Gnat, and the Elk Hair Caddis, both of which work great throughout the country as versatile imitators of midges.

Wet flies and nymphs sink below the surface and are designed to imitate insect larvae, baitfish, or drowned insects. Some great examples of these variants include, but are not limited to, the following: the small, but effective, Zebra Midge, the Copper John, which sinks quickly, the Woolly Worm, which any fly angler should carry in several color patterns, the Prince Nymph, and the Gold Ribbed Hare’s Ear. Nymphs are generally freshwater flies, though, so consider other options when heading to inshore locations.

Long flies can mimic anything from minnows to leeches, and a retrieved in such a way that they possess erratic, lifelike action designed to entice more aggressive fish. One of the most popular flies in this style is the Woolly Bugger. Other great options are the Muddler Minnow, which creates noisy vibrations in the water, Lefty’s Deceiver, Strips, which are comprised of a “wing” of hide with a bit of fur, and the Mickey Finn Bucktail.

While the flies listed above are favorites among fly anglers, don’t feel as if you’re limited to them on the water. Fly tying is about creativity and knowledge of your local waters, so feel free to modify core designs when you fasten a hook to your vice. As I said earlier, we can’t rely on other people’s knowledge forever, and it helps to learn a little ourselves. As the old saying goes, “Give a man a fish and he’ll eat for a day. Teach a man to fish, and he’ll eat forever.”