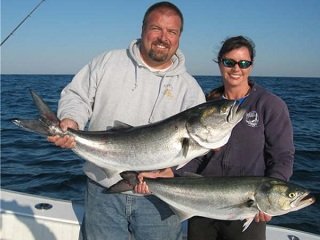 It can be difficult to plan for fishing trip when we’re travelling to a region we’ve never fished before. When you’ve never sought a particular species, it’s hard to know what to bring or where to being your search. I’ve been there and know how intimidating it can be. However, this is exactly why I profile species each month in Fish Files. Recently, a buddy of mine recently returned from a fishing trip to the Florida coast, where he spent some time angling for blue fish before they head north. After listening to him tell me about his trip, I decided to spotlight bluefish for this month’s Fish File, so sit back and keep reading to learn a little bit about these highly-prized gamefish.

Bluefish are pretty straight-forward, in terms of appearance. If you close your eyes and picture a fish, odds are your imagination will come pretty close. They’re gray-blue in color and white on the belly, with a strong body and a forked tail. Their dorsal fin folds back into a groove located on the fish’s back and they possess sharp teeth built for gripping baitfish and other food items. They can reach 40 pounds, but don’t commonly grow over 20 pounds.

Bluefish primarily feed on baitfish and other prey, such as shrimp or small squid, but have also been known to display cannibalistic behavior. They’re extremely aggressive and schools of bluefish will drive baitfish into shallow waters and onto beaches in a feeding frenzy. That being said, anglers should also be very careful when handling them, and I advise you to wear gloves when doing so.

Anglers seeking bluefish should arm themselves with a mixture of live bait and lures. Fish such as mullet, mackerel, ladyfish, shrimp, and squid make great bait, cut or live. Artificial baits are a good idea, as well, and effective ones include spoons (trolled or cast) and topwater plugs (clown pattern works well). Topwater baits work very well during low light hours in shallow water or near sharp drop-off points. Most anglers love using topwater lures, due to bluefish’s habit of leaping out of the water and attacking the bait from above. If you can locate a feeding frenzy of schooling bluefish, though, it won’t really matter what you throw at them, as they’ll strike just about anything at that point.

Light tackle is popular for bluefish, and include medium to medium-light rods, line in the 12-pound test range works well for smaller fish while 20-pound is probably better for larger fish. I’d also use a steel leader or very strong monofilament leader material, in order to withstand the aggression and teeth of a bluefish strike and the fight that follows.

Bluefish are an aggressive species that is fun to catch, and brings nothing but excitement from the moment of the strike to when you get one to the boat. Any saltwater angler will attest to the experience and anyone headed to the coast anytime soon would do well to attempt to hook into these feisty fish.