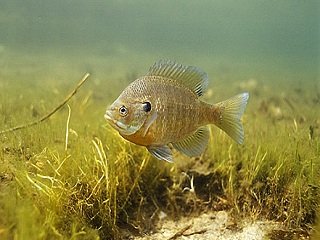 Today’s Fish File brings us a little closer to home and down to earth by highlighting one of the most common fish species in the nation: bluegill. Bream, brim, gill, copper nose, or just bluegill; whatever you call them, bluegill are one of the most highly-sought fish in the water. The catch limit is high, they taste great, and are actually incredibly fun to catch on light tackle. Keep reading to find out a little more about what makes bluegill tick, as well as some basic tips of angling for them, in today’s Fish File.

Bluegill are easily recognizable, due to their distinctive features and large population. They get their name from the dark blue color on the sides of their head and chin. As a species of panfish, bluegill possess a rounder body outline. They’re distinguishable by a dark spot just behind their gills, as well as the bright orange or yellow coloration found on their bellies. Also, their sides possess several dark, vertical lines. While bluegill commonly fall within the four to eight-inch range, fish reaching lengths of nearly a foot are highly-prized and aren’t that uncommon.

Found in pretty much any body of water nationwide, bluegill tend to stick close to shallow waters during the spring where cover such as logs and vegetation is plentiful, in order to avoid predators. However, due to their smaller size, direct sunlight can be uncomfortable, and they can be commonly found residing where the deeper drop-offs meet the shallow waters. Also, they can often be found in large numbers, and many times intermingle with species such as pumpkinseed or crappie. Bluegill typically feed on insect larvae, and even plants, but larger fish can eat baitfish and even small crayfish. They also feed aggressively at the water’s surface when insect activity is heavy there.

Bluegill anglers commonly use live bait, such as red worms, nightcrawlers, or wax worms when fishing. More often than not, suspending such bait below a bobber will produce fish all day long. Anglers interested in eating the fish might want to utilize a crappie rig suspended below a bobber, as this will bring in two fish at once. Other techniques that work involved pieces of corn on a cane pole, small crankbaits and spinnerbaits (for larger gills), or even just a bare hook, as the shine will usually entice a strike. Bluegill have often been used as bait for larger fish, as well. Many bass anglers have tied on small gills in an attempt to entice bass or other predator species.

Bluegill are one of the most common fish in the waters of this country, and it’s a shock that more anglers don’t seek them out. They can be caught year-round (ice fishermen love them) and can be easily prepared at the end of the day. Breaded and friend, there’s not much that beats a limit of bluegill. The only way it could be better is if you’re fishing with others who may not like fish. Then you can take their gills off their hands!