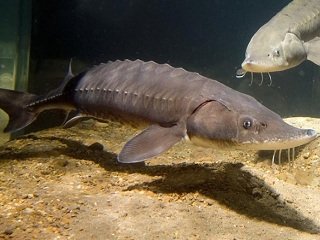 There are certain species that really haven’t had to evolve over the centuries, such as the Great White shark, or the Nile crocodile. Perfectly suited for their purpose in the world, such species sit upon the apex of their ecosystem and continue to do what they were made to do without natural predators or a need to alter their behavior. Another such species, and the topic of today’s Fish File, the Lake sturgeon, resides in the northern regions of the United States, where it contently makes its way throughout the waters as another one of the animal kingdom’s living fossils.

Lake sturgeon are quite distinguishable from other fish in the same body of water, due to their somewhat prehistoric appearance. Their long, slender bodies are lined with several bony spines that quite hard and have been known to cause injury to boaters and swimmers on occasion. A sturgeon’s mouth is usually flat, and spade-shaped, as the fish is primarily a bottom feeder and uses its shovel-like mouth to stir up sand and rocks to find food. Their mouths also possess several barb-like tendrils that serve as sensory tools to both locate food and navigate the murky depths, much like a cat’s whiskers. Sturgeon can grow to lengths of over nine feet, and have been known to reach nearly 400 pounds, which is largely due to their long lifespan (over 100 years).

Being a bottom feeding species, Lake sturgeon feed primarily on food items they find while foraging the dirt and rocks, such as insect larvae, worms, crawfish, small fish, and submerged food like dead fish and other animals.

Fishing for Lake sturgeon is a tricky endeavor, as there are few states that allow it, and even then, there are several restrictions to which to adhere. Anglers looking to hook into sturgeon will need to think big, in terms of tackle. Sturgeon tend to stay close to bays and will also swim between islands or points of land. A heavy action rod and strong reel are a must, and I suggest spooling on some 40 to 50-pound test line to handle such a large fish. Tie on a large hook (2/0 should work) and bait it with nightcrawlers, dead minnows, or cut bait. Keep your bait at the bottom and be patient. You can also use a float to get a better idea of when you get a bite. Once you get a bite, it’ll be a long fight to muscle the fish in, so you’ll need to be smart and just try to wear the sturgeon down until it’s too tired to fight.

Anglers will have their own preferred rigs and baits to catch Lake sturgeon, but ultimately, using live/cut bait near the bottom, where sturgeon congregate is the best way. Yes, you might pull in a few different species before a sturgeon sometimes, but that’s the fun part, right? I guarantee that, when you fight a 100-pound sturgeon to the boat, though, a few catfish will be worth it.