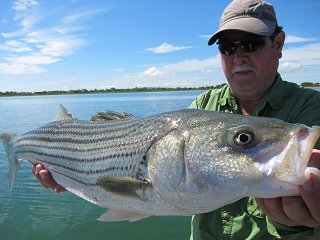 Any angler will attest to the excitement and adrenaline rush that are the topwater bite. There’s just nothing like the explosion that occurs when a huge fish strikes a topwater lure with ferocity and power. The tactic is well known for tarpon, bass, or Northern pike, but one species not to be overlooked, in terms of topwater aggression, is striped bass. Today, we’ll explore topwater fishing for big stripers and learn more about how to use the tactic to muscle big numbers of bass to the boat this season.

Striped bass, landlocked striped bass, are voracious predators and when they attack prey at the surface, they go crazy. If you closed your eyes, you’d think that a striper strike was someone dropping a cinder block into the water. In fact, they commonly leap from the water and strike from above on the way down!

Throughout May and June, topwater striper action is at its peak. This is when striped bass will congregate in shallow waters and actively feed around isolated islands above and below the surface. Low light conditions are ideal, as stripers tend to shy from bright, direct light, and the low visibility will make them more prone to strike at the noise and water displacement caused by surface lures. However, shallower water means they’re more prone to spooking, so be sure to use a stealthy approach, especially when maneuvering your boat.

Minnow-type plugs and walking lures in shiner and mullet patterns are perfect for striped bass. Many conventional striper tactics employ heavier tackle, but for casting hundreds of times over the course of a day with topwater lures, I suggest going lighter. You might end up making several dozen casts before getting a strike, so a high-profile reel and heavy rod would grow cumbersome quickly.

Anyone who’s used topwater lures before knows just how to work them along the surface to entice a strike. I always suggest allowing the lure to rest after the cast for a few moments, just until the ripples fade, first and foremost. After that, it really depends on what type of lure you’re throwing. Plugs will require alternating between twitching the rod and reeling the slack line, in order to create the popping sound. Spook-type baits work best with a Walk-the-Dog technique, which involves constantly twitching the rod while reeling to create a side to side motion that leaves a wake behind the lure during the retrieve.

If you find yourself in striper country this Spring, I suggest bringing along a few topwater lures and a bit of patience. Throwing topwater lures for striped bass is the tactic to use when you want to single out those huge fish. You may not catch as many fish and it may be some time between bites, but the ones you do reel in will be big and will most definitely warrant a photo or two.