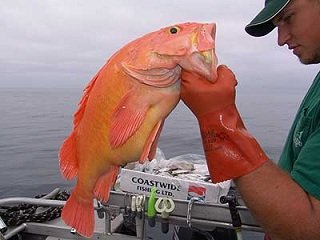 As I’m sure I’ve said before, one of the most exciting things about saltwater fishing is that once your line is in the water, you really never know what you’re going to reel in. I’ve fished for redfish and pulled in small sharks, and have thrown a surface lure out for bass and watched an alligator gar explode on it, as well. If you’ve ever fished for halibut near Alaska, or threw your line out along the West Coast, then there’s a good chance that, at some point or another, you’ve pulled in the subject of today’s Fish File, the yelloweye rockfish.

It’s pretty easy to tell a rockfish when you’ve got one; they’re big, orange, and well, have large yellow eyes. They also have quite a pronounced and spiny dorsal fin, as well as a light lateral line that runs along their body. They can reach lengths of around three feet and, on average, live to be roughly 125 years old. Yelloweyes tend to live the deep, deep waters of the East Pacific, ranging from Alaska down to California, where they spend their lives among rock piles. Rockfish feed primarily on invertebrates such as crab, shrimp, and squid, but also feed on other fish, as well, including other rockfish.

Due to their size and great tasting fillets, rockfish are popular among anglers, and are commonly caught using a few different tactics. Trawling was once, and still is, a popular technique to catch them, but there are tighter restrictions on it these days. Using a rod and reel, you can catch them, too. Some anglers like vertical jig over a deep spot with shrimp or squid that are hooked every 8 inches or so up their line and are attached to a heavy sinker. You’ll need to be sure you’re equipped with at least 30-pound test line with a strong leader, first and foremost, in order to handle the large rockfish. Since they like to sit deep and you’ll be jigging (much like grouper or halibut), the fight can be long and intense. Make sure you’re using quality gear and strong hooks.

Unfortunately, rockfish aren’t as populated as they once were, which has led to increased restrictions on fishing for them over the years. In fact, in some states along the coast, the yearly quota is as low as 1000 fish, in order to prevent the species from being completely wiped out due to overfishing. For this reason, I highly suggest thoroughly researching the regulations on rockfish in your state or the state to which you’ll be visiting for your next trip before hitting the water. One of the most important aspects of fishing—and all outdoor activities—is conservational respect by following the rules and doing your part in ensuring that future generations have the same opportunities to enjoy nature as we do.

Hard to mistake and difficult to catch, yelloweye rockfish are just another gem that saltwater fishing has to reward to those diligent enough to hook into one. As with any big fish saltwater endeavor, arm yourself with the right equipment, as well as patience, and you’ll undoubtedly pull in a huge, orange monster from the depths the next time you hit the deep waters of the East Coast.