Anatomy of a Buzzbait 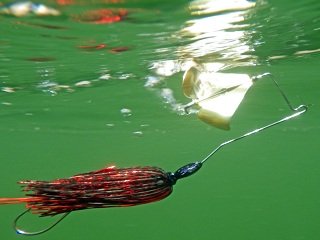 Any bass angler will attest to the effectiveness and excitement that go along with throwing a buzzbait. There’s simply nothing like the small wake created by the propellers of a buzzbait as it’s steadily retrieved across a glass surface. Well, nothing except the explosion of a fish striking the lure. Like every lure, the design of a buzzbait has a purpose and each component contributes to its overall performance on the water. Today, I’ve broken down each part of these much-loved lures to show you how they work so well.

For those of you who may not be familiar with them (tsk, tsk), buzzbaits are topwater lures outfitted with a propeller, a jighead, a skirt, and a hook. After a cast, you reel fast enough to keep the lure at the surface, where the propeller creates a “chirping” noise and leaves a wake. Just below the surface, the skirted jighead pulses with action that attracts fish. Buzzbaits have long been a staple lure among anglers and I personally believe every fisherman should always carry a few in their tackle box.

We’ll start with the frame of a buzzbait, which is made up of a bent wire frame. The style and shape of the frame can vary, depending on the brand, with some frames spanning nearly a foot in length and others actually comprising of dual propeller blades on either side of the jighead. I’m a fan of the standard design, though, which has never failed me.

One of the most noticeable parts of a buzzbait is the skirt, which is usually made of silicon and comes in hundreds upon hundreds of color patterns. I always try to keep a black, a white, and charteuse skirted buzzbait on me, but have had great luck with orange/gold, and silver/blue patterns in the past, as well. Aside from a skirt, anglers have also taken to attaching a soft plastic trailer to the buzzbait’s hooks, and some companies have allotted for this by adding several strands of longer skirt material to their baits.

Now we get to the propeller, or blade. This is what gives the buzzbait both its function and its name. Blades can come in a variety of styles, so it can be a little difficult to distinguish the quality ones from the gimmicks. I’m a strong advocate for the simple, metal design, but I’ve also used plastic blades, triple and quadruple bladed styles, hammered blades (which resemble the surface of a golf ball), and even some that have smaller blades inside the main blade that rotate in the opposite direction to create more wake. As with most aspects of fishing, though, I advise you to keep it simple and try not to get distracted by the new designs.

Lastly, you have the swivel or rivet, and the hook. Swivels are used to attach the blades to the wire frame and come in roller or ball-bearing variations. Some prefer a rivet instead of a swivel, due to the fact that rivets add more squeak to the lure during the retrieve. The hooks on a buzzbait are pretty straightforward, and are typically hidden within the skirt material so that when a fish strikes the skirt, it also engulfs the hook. You can also use a trailer hook to increase the chance of a hook up, but too many hooks hanging off can catch on weeds and other objects at the surface, which is why some anglers opt for weedless hooks on their buzzbaits.

Buzzbaits have long been a go-to lure for anglers caught in certain situations on the water, and it’s no secret why. I’ve personally caught some huge bass using buzzbaits and have seen many others do the same. The bits and pieces I’ve outlined above combine to create one heck of a lure that every angler should make sure to have in their possession when they’re on the water.