Alabama Rigs and How to Fish Them 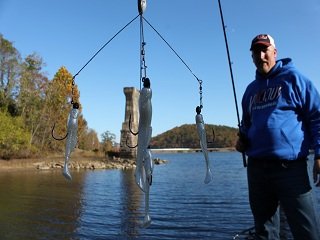 There are thousands of products and hundreds of techniques that anglers utilize on the water on a daily basis to catch fish. Still, there are a select few innovative anglers who never stop inventing new products and searching for new ways to catch fish. One such new product is known as the Alabama rig, and has been a big standout in a few tournaments over the last year since its arrival on the scene. What is an Alabama rig and how exactly does it work, though? Keep reading to learn more!

At first glance, the Alabama rig looks a little busy for most fishermen’s tastes. The rig consists of a central, hard plastic fish body with five wires protruding from the back in the shape of an umbrella. These wires can be rigged with other baits, such as grubs or swimbaits. When retrieved, the rig imitates a roaming school of baitfish and does a great job at enticing big, suspending bass.

The Alabama rig was designed to catch bass that are suspending at specific depths. To fully capitalize on the rig’s effectiveness, you’ll need to locate where the fish are holding and then count the rig down to the depth after your cast. Once you reach the depth, use a medium-speed retrieve and pull the rig right through where the bass are situated.

Try to look for areas where there is a current, but where there are also locations such as points and current breaks where bass will hold and lie in wait. Grassy points, ridges—pretty much any structure that holds bass—is where you want to pass the Alabama rig by. Where a single lure may have attracted a look, a turn, or maybe even a follow in the past, the Alabama rig’s five-lure appearance has proven itself to draw strikes from otherwise reluctant big fish.

When using the rig, you’ll need a heavier setup to handle the added weight of both the rig itself, as well as the potential multiple fish hook-ups you’re sure to receive. Strong line in the 16 to 18-pound test range (65-pound for braid) is ideal. Also, you’ll want a heavy rod in the seven-foot range. I’d also suggest using a reel that has a medium-speed gear ratio; somewhere around 6.5:1 will work.

If you’re tired of missing out on big fish, or just in the mood to try something different to catch big fish more consistently, I’d definitely check out the Alabama rig. On lakes where fish tend to hold at certain depths, the rig is deadly and can help you put big fish in the boat all day. Be sure to match it up with the right rod and reel combo, as well as heavy line, and you’ll have no trouble pulling in multiple five-pounders the next time you hit the water.