Suckers on the Fly 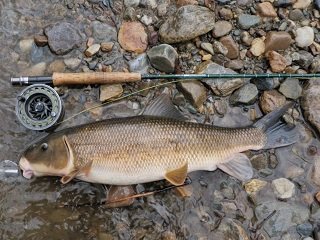 There are some species—carp, for example—that anglers consider to be trash or not worth their time. However, if anything can be said for some of these fish it’s that they put up one heck of a fight, especially on fly tackle. One such species is the sucker fish, which any Midwest fly angler will tell you is one of the hardest fighting fish in the water. No, they’re not for the dinner table. No, they’re not the prettiest fish in the water. However, they’re beloved among fly fishing as one of the sports best challenges, and today I’ve provided you with a breakdown of how to find and fish these bottom dwelling fighters.

Suckers can be found in shallow channels with swift currents, and during the spawning season, have a tendency to roll and thrash near the surface while they seek out locations to spawn. Look for areas where swift currents meet slow ones and suckers will often reside there. Also, breaks in the current are a common holding spot for suckers. Be careful not to spook them while wading close to a potential spot, as they tend to spook easily.

You won’t have to alter your equipment much, if at all, when seeking out suckers. The fish can reach decent sizes, so a rod in the 6 to 7-weight range is a safe bet. Reels with enough capacity to handle the runs that suckers are known for are ideal, as are 10-pound leaders around 7 to 9-feet.

As with any species, catering to the natural prey is smart. Suckers are bottom feeders, and tend to eat snails, worms, and other insects, so flies that sink fast and resemble these food items will be your best friends. Nymphs, scuds, eggs, and worm imitators are good bets, and I’d advise sticking with smaller hooks, as suckers have smaller mouths and aren’t aggressive eaters. Make sure the hooks are strong, though, so they can hold up to the strength of a sucker. Use smaller flies when the water is clear and the opposite in muddy conditions, as well as some sort of beaded weight, as this will get the fly to the bottom faster.

Fishing for suckers requires some patience, as it can take several passes at a group of fish before you actually get a bite. Find a potential holding place and cast your fly ahead of it so that it gets to the bottom before reaching the fish. Keep the rod tip high to keep the slack off the line and set the hook as soon as you see the indicator go below the surface.

Sucker fish are one of the Midwest’s hardest fighting fish on the fly, and any fly fisherman should make it a point to focus on catching them some days this season. Sucker fish may not be the prettiest fish in the water, but what they lack in beauty, they more than make up for in tenacity. Fishing for them requires patience and the willingness to go toe-to-toe with one of the toughest fish in the river, but the rewards far outweigh any strain you may endure.