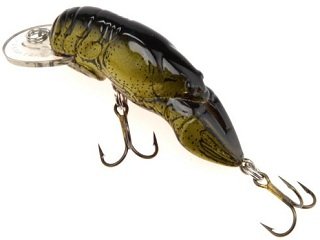 There are some species of fish that are just more active and thus, easier to catch, during certain times of the year. Trout are one such species, due to the fact that they’re cold water fish, which makes seeking them out during the hot summer months a daunting task. Daunting, but not impossible. The key to catching trout when the temperatures rise is choosing the right bait for the job, a process I’ve helped you with below.

If you’re throwing artificial lures at trout this summer, your go-to bait should be small crankbaits with crayfish patterns. All trout love crayfish and big trout will strike crayfish imitating lures all day. Rebel makes crayfish crankbaits that I’ve had success with for years and they come in a variety of sizes. Live Target’s crankbaits are popular, as well. Furthermore, it’s surprising to me that more river anglers don’t utilize crankbaits. I’ll admit they’re known more for open water success with bass, but anyone whose spent time on the river will attest to the efficiency of products from Storm or Rapala when it comes to trout.

Live bait users won’t need to look any further than live worms when they hit the river this summer. Any worm will do the job—leaf worms, red worms, nightcrawlers (pinched in half)—but you’ll need to be sure to fish them close to the bottom. Find the bottom while drifting live worms and you’ll see your fishing rod bent in no time.

Don’t think I’ve forgotten about the fly anglers out there. The summer months are ideal for throwing insect imitators, due to the sometimes overabundance of insects during this time of year, but be sure to match the hatch. Also, as I’ve mentioned before, crayfish patterns work great and fly fishing is no exception, so crayfish imitating flies are a good idea to bring along, as well.

Due to the fact that trout aren’t as active during the summer, they’re less prone to actively feed as aggressively as they do during the winter. Again, this doesn’t mean trout fishing on the river is impossible, but it will require some patience and determination. The suggestions listed above are great starting points for your next summer trout trip to the local stream. Be smart and adapt your baits to suit trout behavior during the summer months and you’ll have a fish on the line in no time.