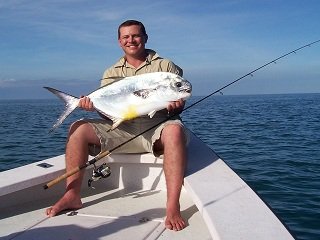 Light tackle anglers who’ve travelled to exotic island inshore destinations will undoubtedly be familiar with the Big Three. I’m of course referring to the three most desired gamefish species that make up a trinity of targets for inshore anglers: tarpon, bonefish, and permit. Catching each of these fish during a trip is known as a Grand Slam, and is something the vast majority of anglers aspire to achieve one day. Today’s Fish File spotlights the permit, one of the toughest inshore species around. Keep reading to learn more about what makes the permit tick, as well as popular tactics used to reel them in.

Flat-bodied and muscular, permit have a gray or even blue coloration. They have elongated dorsal fins along the top and bottom of their bodies, as well as crescent-shaped tail. Permit are commonly found in saltwater flats, but due to their large size (20-50 pounds) and skittish nature, they tend to stick close to channels and deeper water, where they can find ample cover and easy access to deeper escape routes. They feed on shrimp, crabs, and smaller fish as they prowl the flats, their fins breaking the surface like a shark.

Permit are built for speed and endurance, which makes angling for them a battle. They’re large and strong, but permit are very easily spooked, which makes locating them without scaring them off very difficult. If you’re skilled enough to hook into one, their strength and tendency to run make fighting permit an absolute test of stamina and skill.

When fishing for permit, two distinct tactics have proven to be favorites: live crabs and flies. Light spinning tackle users will have good luck tying on a live fiddler crab and casting it towards tailing permit on the flats. Pair this setup with 8 to 12-pound line and you’ll be in good shape. Fly anglers tend to wade in the shallow waters and stalk permit throughout the flats. Using flies in shrimp and crab patterns is a safe bet here, but you’ll need to keep your movements slow and stay low to avoid spooking the fish.

Inshore fishing’s Big Three consists of a trio of mighty fish known for their elusive behavior and mighty fights in the water, and permit have definitely earned their spot. Incredibly strong and fast, permit are a target that any angler will have to hone their skills to catch. Keep the information listed above in the back of your mind if you head to the salty flats in search of permit and you just might find the edge you need to capitalize!