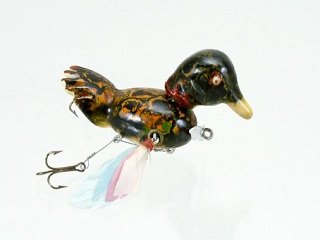 Flip through a fishing catalog or walk through a fishing retailer long enough and you’ll eventually stumble across the muskie section. The tackle associated with muskie will be instantly recognizable because at first glance they’ll look like novelty lures or wall decorations. Muskie and pike are big fish and thus require big lures, which is why many lures used to catch them are well over seven or eight inches in length. However, I’ve seen some crazy looking muskie baits over the years and today I wanted to describe a few of them to you.

One of the first muskie baits I remember scratching my head over was the baby duck lure. There have been many variations of this lure—some using fake feathers and some using wood—but the basic design remains the same. The body resembles baby duck and there is usually at least one treble hook attached. As you can guess, the lure floats on the surface and entices muskie and pike to strike with an explosion of force. I’ve personally seen muskie strike at baby ducks in the wild, so I can attest to their ferocity and opportunistic predatory feeding habits. As far as the effectiveness of the lure goes concerned, though, that I cannot guarantee. If you have a few moments to spare the next time you’re surfing the Web, you should look up the baby duck lure just to see for yourself.

Along the same lines as the baby duck lure is the muskrat lure. This furry little surface bait resembles a small muskrat, complete with eyes and tail, and works just like any other surface lure. At first glance, the muskrat resembles roadkill, with its matted fur and long tail, but I’ve heard many stories about muskie anglers in Minnesota and Canada using them to catch fish so their effectiveness on the far can’t be simply a myth.

Steering away from surface baits, we come to the Medussa soft plastic muskie baits. Made by Chaos Tackle, these baits come in 9 and 12-inch models and consist of a soft plastic body, two sharp treble hooks, and three octopus-like plastic tails. The tails maintain an erratic action throughout the retrieve that muskie can’t resist, which gives the lures both their unusual appearance and their effectiveness.

Muskie baits are among the oddest lures on the market, in terms of appearance, but their usefulness on the water can’t be denied. As with any other species-specific tackle, there are hits and misses, but don’t let the stories or reviews always be your deciding factor in choosing a product. They are crazy looking, but someone made them for a reason. Will they work for you? You’ll have to pick one up and find out!