Anatomy of a Worm 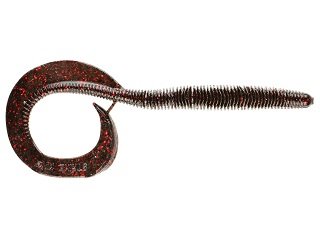 There are several bass lures and baits that have earned a warm spot in anglers’ hearts, not to mention a permanent spot in their tackle boxes, as well. One exciting aspect of the sport of fishing is taking the time to learn what makes these lures work so well on the water. One such bait is the soft plastic worm, which to bass fishermen, needs no introduction. Worms bring an efficiency, practicality, and versatility to fishing that is hard to much, and today we’ll break down soft plastic worms, end to end, in order to get a better idea of why they’re such a favorite among anglers.

Like the vast majority of other soft plastic lures, worms consist of a body molded from plastic and can possess any number of subtle physical features. Most worms have ribbed bodies, but the ribbing can vary in number and size. This characteristic creates a specific displacement of water and vibration in the water, which adds to the worm’s appeal. Some models also have a thick segment in the middle of their body. This acts as a type of joint between the worm’s two main body segments and in models such as the Senko, a secure anchor point for a hook when rigged wacky style.

The tail end of a soft plastic worm tends to be the business end in most variations. Most models designed for Texas or Carolina rigs have a ribbon-like tail that wafts erratically in the water, especially during the fall, which is when the majority of strikes occur. The tail design varies in shape and length from product to product. Strike King’s Rage Anaconda worm, for example, possesses a very pronounced tail that takes up nearly half the length of the worm itself. The longer the tail, the more action it creates. Generally, a worm’s body tapers to a thinner diameter towards the tail, which makes the head section heavier. When rigged, these worms will stand on end with the ribbon on top, creating a wafting motion that attracts fish. Some models don’t have a ribbon tail, though, such as Senko types, which are designed for different types of rigs.

Worms also come in dozens of colors, with the most popular colors being dark and natural, such as pumpkinseed or black. The length of a worm also varies, with some worms being as short as 4 inches and others measuring in at 16 inches.

Such a seemingly basic, yet highly efficient design is what allows plastic worms to be rigged in a number of ways. Texas, Carolina, drop-shot, and wacky rigs are examples of tactics associated with plastic worms that have proven to be highly successful on the water. Not only that, but worms are quite inexpensive, which makes filling a tackle box with an arsenal of these plastic wonders easy and smart. Such versatility and efficiency has made worms a go-to bait in a variety of situations and they continue to be reliable producers of fish year after year.