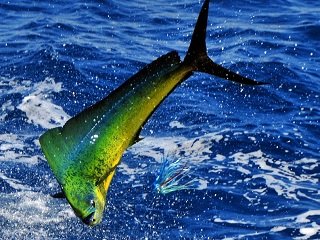 After a recent dinner at a seafood restaurant, I wanted to break out the Fish File on a species that many see on a menu, but few know much about. Mahi mahi (aka dolphin or dorado) are an odd-looking saltwater species that has been a popular target among the fishing community over the years. They taste great when cooked and provide a tough challenge when hooked. Keep reading to learn more about the fish so nice, they named it twice.

If you’ve ever seen a mahi mahi, you wouldn’t forget its appearance. The fish tends to grow around 20-25 pounds, but can weigh over 30 pounds. They have long, slender bodies with a dorsal fin that runs the entire length of their back. Males have a very pronounced head while females have more rounded heads. Perhaps the most striking feature of this mighty fish, though, is its dazzling color, which consists of bright orange and yellow, as well as blue and green.

Mahi mahi are a predatory species and feed heavily on other fish such as mackerel and flying fish, crabs, and squid. Their range is broad, as they’re commonly found in the waters of the Caribbean, along the west coast of Central and South America, the Pacific near Costa Rica, the Gulf of Mexico, the Atlantic near Florida, Southeast Asia, and Hawaii.

Experienced anglers will tell you that, when seeking mahi mahi, look for the birds. Frigate birds hovering and diving around floating weeds where fish and other bait congregate are a good sign that mahi are nearby. Typically, trolling with ballyhoo (a species of baitfish) with 30 to 50 pound test line is a reliable tactic. You can also use fly techniques, accompanied by nets of live chum. The chum will excite the mahi into a frenzy and then you can cast a fly into the fray for a hook up. Be prepared, though, because mahi mahi are a strong fish (their name means “very strong” in Hawaiian) and put up a good fight when hooked, often leaping several times.

One of the main reasons mahi mahi are a popular gamefish is their delicious taste on the dinner table. I recently had an amazing sample of mahi mahi at a restaurant and there are several other tasty ways to prepare the fish, as well.

Mahi mahi, named for their strength and tenacity, are one of the most beautiful and powerful fish in the oceans and any solid charter or guide will be able to help you land your first one during your next visit to saltier waters, should you desire. While most saltwater anglers target the Grand Slam or large fish like marlin or tuna, mahi mahi is a species that every angler should keep on their bucket list of fish.