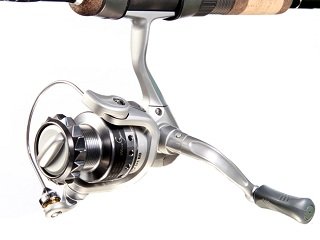 It’s funny how often we notice a product, take a moment to observe its unique design, and then inevitably forget about it. This happened to me recently, when I stopped by an outdoor retailer to kill some time and check out some of the newer products on the market. There I stumbled upon a product that I remembered from my time as a fishing associate, but one that had fallen into obscurity for the last few years: the WaveSpin spinning reel. Today’s Tackle Review spotlights this one-of-a-kind reel and whether or not its design is simply a passing fad or effective on the water.

At first glance, I thought the WaveSpin was a reel for little kids. Anyone who’s seen it before might agree, as the spool’s top portion possesses a serrated edge, similar to the blade of a circular saw. This is the spool’s innovative take on reducing bird’s nests and wind knots, though. This edge is designed to propel line during the cast, but control it when there is slack. The line rests in one of the notches, which keeps it from becoming too loose.

Aside from this new design, let’s get down to the bones of the WaveSpin. The reel is available in two sizes with two line capacities (10/220 and 8/220), as well as two different gear ratios (5.5:1 and 5.0:1). Internally, the WaveSpin is equipped with eight sealed stainless steel ball bearings, as well as an instant anti-reverse. All of the features listed above are wrapped in a lightweight graphite body.

The WaveSpin has a price tag of $89.99. While I don’t think there’s anything wrong with the reel at all, I would much rather spend nearly $100 on a brand like Shimano or Pflueger. Fishermen with a big arsenal of reels might want to pick one up if they have a rod in need of a reel to partner with, but if you’re in the market for a new reel or a replacement, I’d still look into more established manufacturers.

The WaveSpin spinning reel does indeed possess an innovative design and a smooth performance, thanks to the eight bearing system, but it faces a lot of competition from other reels in the same price range. Check out the WaveSping if you’re a new angler, unfamiliar with spinning reels, or are tired of tangles. However, as I stated earlier, anglers ready to spend nearly $100 on a reel could do better with higher quality brands.