Anatomy of a Popper 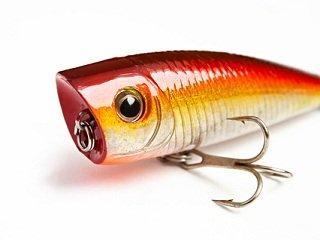 Sometimes when I first look at a lure, it leaves me scratching my head. I still remember when I first got into fishing and my buddy helped me pick out lures for my tackle box. I carried the basket as he filled it with buzzbaits, spinnerbaits, worms, and a pink mouse—all strange looking to me at the time. He added a few poppers to the basket and I remember wondering how something so odd looking would catch fish. It wasn’t until I threw it out on a still morning and gave it a few twitches that I received my explosive answer. Poppers may look like small toys, but their design enables them to be deadly on the water. Today, we explore what makes poppers so effective, so keep reading to learn more about these little beauties.

Poppers are a topwater bait and being such, are usually comprised of buoyant balsa wood. They’re commonly bullet-shaped, but vary in slenderness, as well as stoutness. Some, such as Rebel’s Pop-R’s, are narrow, while Arbogast’s Hula Popper are more round and shortened. I’ve used both with great success, so you really can’t go wrong with either.

A concave mouth is what gives poppers their name. With a twitch of the rod, this design feature creates a sploosh and leaves a trail of bubbles. To utilize this to the fullest, cast out and allows the ripples surrounding the popper to completely dissipate. Then, alternate between a big twitch and two or three small ones at once, with a good pause in between each sequence of twitches. More often than not, the slower you work a popper, the more strikes you’ll attract.

Some models use a skirt, which is often comprised of silicon or shimmering feathers. This adds to the popper’s appeal by creating a flash or movement that further entices fish to strike with fury. Lastly, nearly all popper models are equipped with a pair of strong, sharp treble hooks. The size of the hooks differs between the varying brands—Rebel’s being smaller and set further apart and Arbogast’s being large and set closer together (something that can cause problems at times)—but ultimately the hooks are quality and get the job done.

You’ll notice a difference in color patterns as you glance from brand to brand of poppers. Some brands favor bright and bold patterns that mimic frogs, while others use a combination of solid colors—white or pink—and split variations like chrome/black or black/gold. I like to keep a variety, but I’ll always make sure I have pink, white, and black.

Poppers often elicit second glances from people who’ve never seen them before, but they also attract second and third glances from fish, which warrants keeping a few on hand when you’re on the water. A slow approach is ideal when using them and you’ll be pleasantly surprised when you attract that first explosive strike on a calm morning.