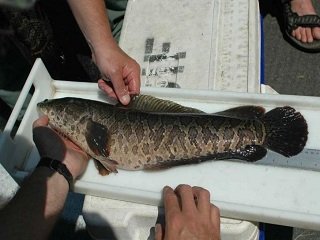 There are some species of fish that instill hatred and disgust throughout the fishing community simply at the mention of their name. They cause problems for fishermen, often taking bites out of hooked game fish or destroying lures and are often immediately killed when brought to the boat in an effort to quell their increasing numbers. I’ve covered such species in the past—bowfin and alligator gar—but today’s Fish File focuses on yet another invasive and much-hated species, the snakehead.

In all honesty, at first glance, the snakehead is actually a pretty cool looking fish. Their long, slender bodies are adorned with blotchy stripes and the elongated fins that run along both their backs and bellies almost give them an eel-like appearance. Unfortunately, these fish are designed to be predators, and they have a mouth filled with sharp teeth, a vicious bite, and the attitude to suit that purpose. Snakehead primarily on aquatic or semi-aquatic animals, such as frogs and snakes, and have even been known to eat mammals like rats and chipmunks. Furthermore, they often eat other fish species and will attack fish out of aggression, which leads to fishermen pulling in trophy bass with bite marks.

One feature that distinguishes snakehead from other species is their ability to breathe air and survive out of the water for lengths at a time. If they can remain wet, they can last for up to four days on land and can travel between water sources. This characteristic, along with their apex status and rapid reproduction rate, have caused them to become a destructive invasive species throughout many regions.

Due to its aggression and history of sometimes attacking humans, the snakehead has been the subject of many television programs and films—documentary and fictional. On his show, River Monsters, host Jeremy Wade ventured into the urban canals of Florida and experienced the aggression and voracious behavior of snakeheads firsthand. The fish has also been featured in a handful of sci-fi movies that depict them as land and water-based killers.

Believe it or not, but, like bowfin, there are anglers who actively seek out snakehead for their strength, fury, and the excitement they provide. It isn’t hard to entice a strike, due to their nature, but durable topwater lures are usually the way to go. However, many states advise anglers to prevent the spread of snakehead by reporting each one caught to the local DNR.

Invasive species can cause massive damage to local ecosystems if left unchecked, and the introduction of snakeheads to the United States is a prime example. The fish’s rapid reproduction and ability to move between waters on land has enabled it to spread and become an overwhelming nuisance to anglers and environmental organizations alike. Anglers have been known to catch them in regions where they flourish, but be careful should you bring one to the boat; they pack quite a bite.