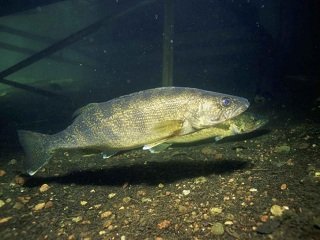 Experienced walleye anglers know that when autumn arrives, fish tend to move towards river systems. While many fishermen head towards big rivers to capitalize on this, focusing your efforts on smaller river channels where the current is slower can pay off. I’ve broken the fall season down into three segments—early, mid, and late—and have provided some tips for each segment, beginning today with small river walleye during early fall.

In early fall, when the water temperatures drop to around 60 degrees, walleye have a habit of moving towards portions of the rivers where the oxygenation is high. This occurs where heavy currents meet calmer ones and turbulence is created. Locations such as these are meccas for baitfish and walleye are quick to follow. Look for areas where eddies or large rocks are present, as these provide a place for walleye to hold out of the current as they wait to shoot out and intercept baitfish.

The walleye holding in smaller rivers are there primarily to feed on baitfish, which means any quick moving lure or bait that mimics such forage is your go-to. Hard jerkbaits in the four-inch range are a safe bet, but it’s a good idea to refrain from using the jerking retrieve you’re used to with these baits. Erratic retrieves work well for bass, but walleye prefer a steadier presentation, so fish the jerkbaits slow and you’ll be rewarded.

You can also throw soft plastic swimbaits if you’re afraid of losing expensive jerkbaits in the logs and rocks of a river. Pre-rigged models from Storm or Northland work well and a package costs just as much as one jerkbait. Throw a good mix of both bait types and you’ll be in good shape. Cast them perpendicular to the current and upstream from eddies and rocks, bringing the baits right through popular walleye hangouts. Any fish holding there won’t hesitate to strike a baitfish imitation when it runs by.

Keep these tactics in mind if you take a trip to the rivers this fall for walleye and you’ll have a live well filled with fish in no time. Be sure to come back for the next segment in the series where I list some tips for mid-fall walleye in smaller rivers.