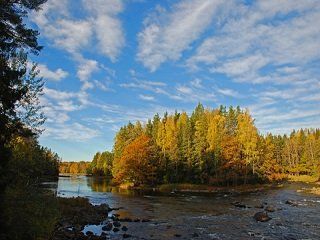 A customer once asked me why there were so many fishing lures. This particular customer happened to be a child, but it was an honest question and I responded the best way I could. I told him that each lure works differently and has its own part to play in a given situation, and that things like temperature, light, and seasonal changes in fish behavior all contribute to lure choice. Fall is a tricky time of year, especially for walleye, and last week I began a three-part series in which I provide tips for catching walleye in the rivers this autumn. Today we continue that series by taking a look at walleye in the rivers during mid-fall.

As the fall months stretch on and water temperatures drop into the 60-degree range and below—into the 50’s—walleyes in the rivers will vacate the heavy current areas altogether. During this time of the season, one of the best places to seek them out is the tail-out section of a larger pool in the river system. The tail-out is the area where a deeper pool becomes shallow before it breaks into the next stretch of shallow, bedded water, also called a riffle. Normally, large volumes of water are being funneled through these shallower areas and the current picks up, but is generally not strong enough to prevent walleye from making their way through.

Some tail-outs are fairly short, as the pools quickly raise and dump themselves into the riffle, while others can be more gradual, sometimes spanning several hundred yards. Cover such as rocks and submerged weeds increases the chances that walleyes will be found there. Target these tail-outs during twilight periods and during cloudy or rainy days.

The tail-out sections walleye use are reasonably shallow and tend to be around three feet. To fish these areas, one of the best options to throw is a soft jerkbait like Zoom’s Super Fluke or Yum Houdini Shad. These baits are great for working over the weedbeds that are commonly found in such areas. Walleye will zip out from behind cover like rocks, logs, and weeds to snatch such baits so use them to capitalize on this instinct.

To fish tail-outs effectively, make casts across the current and work the bait back with a subtle jerk-then-pause, retrieve. The bait will swing with the current during the early part of the retrieve and eventually straighten out directly downriver from your location, which is where the swing will stop and walleye will typically strike.

One of the most difficult things about fishing during seasonal transitions is knowing where to find the fish as they change their behavior and locations. Walleye can be tricky, especially in the river systems, so hopefully the tips outlined above will help you stay one step ahead of them. Next week we’ll round out the series with late fall tips, so be sure to come back and read up!