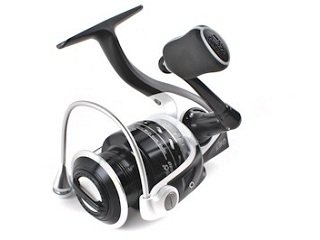 I love it when reel companies who have had such great success with baitcast reel models create spinning reel versions of those same models. The popular Skeet Reese baitcast reel was made into a spinning reel, and Abu Garcia has done this again with the ever-popular Revo S. When I worked at a fishing retailer, some of the most requested reels were the Revo series and now that the company has recreated the craftsmanship and performance that the Revo possesses in the form of spinning reels, I imagine that popularity has only increased over the last few years. Keep reading to learn more about Abu Garcia’s redesigned Revo S spinning reel in this month’s Tackle Review.

The revamped Revo S spinning reel, along with the rest of Abu Garcia’s Revo spinning line, now possess a new drag system that consists of Carbon Matrix technology. Carbon is stronger and lighter than graphite, which boosts the drag system’s durability and sheds weight. The reel also possesses a one-piece gearbox that enables a more accurate alignment of gears, as well as a smoother performance. Finally, the reel has seven stainless bearings that offer corrosion resistance, as well as a smooth cast and retrieve.

That takes care of the internal, as far as the external qualities of the Revo S go, I think you’ll be thoroughly impressed. The machined aluminum spool is built with braided line in mind, so there’s no need for backing, but you can use any type of line you want. The reel’s body is comprised of Abu Garcia’s patented X-Craftic alloy frame—a highly corrosion-resistant material. Furthermore, the reel boasts an Everlast bail system, which is strong and lightweight.

Any angler who’s fished with Abu Garcia’s Revo line will attest to the company’s reputation for crafting reliable, high-performance reels that deliver on the water. Their release and redesign of spinning versions of the Revo baitcast reels has only further endeared them to fishermen. If you haven’t yet gotten your hands on one of the Revo spinning reels, or are in need of that one alpha reel in your tackle collection, then do yourself a favor and check it out.