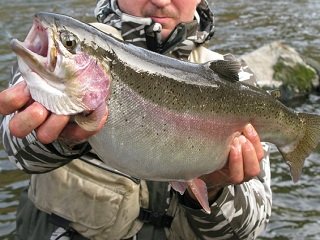 As a fisherman, I know how frustrating it can be to target fish in an over-pressured body of water. This frustration seems to be greater when I’m steelheading because the access points are so few and far between, so when I find one, I can be sure it’s heavily used by other anglers. This means the fish there will be more hesitant to bite. It is for this reason that in my last article, I provided steelheaders who frequent highly-pressured waters with a few hints to help take a bit of the frustration out of the equation. Today, I finish up with a few more hints for those of you who plan on hitting the rivers this winter.

If you’re forced to fish on weekends or when competition for the river is intense, there are still some things you can do to deal with the crowds. Getting on the water at the crack of dawn can grant you a prime drift and a shot at fish that haven’t seen bait for a few hours, or ones that may have just moved in. Another option is to fish after everyone else goes home, as night fishing can be very productive for steelheads. After dark, fish often move out from cover, calm down and feed.

Sometimes catching steelheads when the pressure on the water is high can be as simple as going against the norm. Steelhead get conditioned to watching spawn bags float by if that’s what everyone is using. If you’re not having luck with them, try using a micro-spawn bag containing only a couple of eggs if everyone else is using nickel-sized bags or trying a chunk of skein spawn, or even change spawn bag colors to something different like white or even blue mesh. Also, if spawn is the popular option, try some off-beat baits like wax worms, worms, or shrimp to offer steelhead something different and trigger a strike.

Prime runs and holes are popular locations for anglers but they aren’t the only places in the river that hold fish. In fact, after steelhead get hit by a few hundred sinkers or watch hundreds of floats drift by, they move to places where they aren’t harassed; the kind of places where conventional tactics don’t generally work. Such places are perfect spots for casting in-line spinners, which trigger an aggressive reaction from steelhead that might not necessarily be hungry. With spinners, you can cast the lure out and allow it to swing past a log jam, downed tree, or stump where a steelhead might be holding and provoke a strike without getting snagged up. By fishing this way you can target water that others pass by that holds lots of fish.

To catch steelhead amidst a throng of other anglers trying to do the same, you’ll need to think outside the box a bit and outfox the other fishermen on the water. Not to get cliché, but think a like a fish who gets hounded day and day out by lures and bait, and adjust your strategy accordingly. I wish you luck and maybe I’ll see you out there!