Smallmouth Through the Seasons: Post-Spawn/Summer 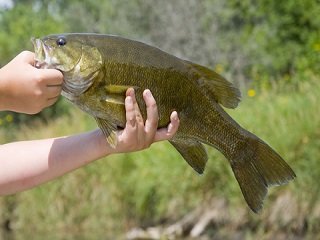 In Part One of my series on smallmouth habits through the seasons, I covered the behavior that smallies take on during the prespawn, along with a few tips on what tactics to use to catch them. Next, we shed some light on how they change their habits during the spawn. Today, we continue the pattern by taking a closer look at the behavior of smallies during the post-spawn, and into the summer.

If the beds in your region are empty, then it’s time to fish points and drop-offs near flats. These areas are where you’ll begin your search for suspended bass. Post-spawn bass tend to be tough to catch, as they’ll spend the first few weeks recuperating after the spawn. Not to worry, though, since they’ll regain their appetite soon enough and start feeding again. The post-spawn generally doesn’t happen at the same time or throughout an entire lake at once, due to differences in water temperature, so keep an eye on that when seeking out fishing locations.

During this time, I suggest using a topwater bait, such as a Zara Spook, even if the fish are situated deep. Also, during the post-spawn, smallies will commonly suspend under floating docks and log booms. Here, you’ll want to throw a jerkbait. If you’re not getting bites, then switch to a jig.

When summer sets in and the water temperature warms into the 70’s or 80’s, smallies will move offshore to deep structure. Here, they may situate anywhere from 15 to 45-feet, or deeper, and become very difficult to catch. However, it is worth the effort to fish for them because many of these fish never see bait fished that deep.

Summer smallmouths often move up shallower after dark, where they feed on nocturnal forage, such as crawfish. Look for rocky banks with about a 45-degree slope, as these generally have deep water close by. Points with a deep water access, offshore humps, and channel breaks are also good. Don’t worry if these spots don’t have any cover on them, since smallmouths like to use deep water as cover. They can hide in dark, deep water just as a largemouth hides in weeds.

One of the best techniques to use in the summer is a split-shot. Use small worms, reapers, or grubs in pumpkinseed and light colors for the best results. When night fishing, use a short armed, black spinnerbait with a single Colorado blade to create a lot of noise and create a nice dark target for smallies to hone in on. You can also use topwaters like Jitterbugs or buzzbaits at night to attract strikes.

As the waters warm, smallmouth will dive quite a bit deeper to get away from the heat, usually returning to the shallows early in the morning or at night. Keep fighting the good fight and fish deep, even when you don’t think it will produce results, and you’ll be pleasantly surprised.