Smallmouth Through the Seasons: Fall/Winter 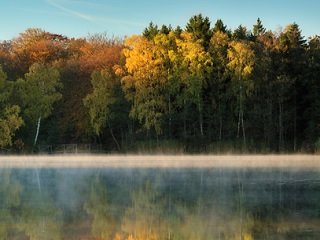 Today we finish up our exploration of the seasonal habits of smallmouth bass by taking a closer look at how they behave—as well as what you can do to catch them—during the colder months of fall and winter. If you count yourself as an angler fortunate enough to be on the water hunting smallies during these seasons, keep reading to learn a little more on how to achieve success doing it!

In the fall, smallmouths tend to move in on long points as the water temperature begins to drop back down into the 60’s. However, they will commonly isolate on the extreme ends of those points, closer to deeper waters, rather than the shallows. The deep sides of these points can also be productive. The majority of fish will continue to suspend out over deep channels, but they may venture shallower during the daytime and can occasionally be taken on topwater lures. Topwater lures can be quite effective on the rivers during this time, as well. You can also continue to use split shots, leeches, spinnerbaits and grubs, but I’d also suggest using crankbaits, too.

Smallmouth tend to stick close together in the fall. This means that, once you find them, you usually have a whole school at your dispense. Keep in mind, however, that they generally school by size, so if the fish you’re catching are on the smaller side, it’s time to move on.

When winter sets in, smallmouths will often stay at or below 20 feet, especially in reservoirs. The biggest smallmouths tend to stay deeper most of the time, whereas smaller fish can be taken in shallow water, especially on overcast days. For good numbers, fish slopes of shale, gravel, or rocky banks that angle into deeper water. Also, fish the V-shaped areas formed by narrow creeks, as fish will often suspend in the middle of these places and move up onto either bank to feed.

One of the best things you can do in the winter—if you have access—is find the warmer water fish near power plants. There, the water can be as much as 20 degrees warmer if you get close enough.

A deep presentation with lures such as jigging spoons or deep running crankbaits is where you’ll find your best results. With a spoon, all you need to do is drop it down below suspended fish or to the bottom if bass are holding there, pause it, then lift your rod tip a few feet. Also, deeper diving jerkbaits will yield results if you refrain from actually jerking the bait. Instead, reel the bait to its maximum depth and let it sit there. You’ll be pleasantly surprised with the results.

It’s been my experience that one of the most difficult and intimidating factors of fishing—especially with species like smallmouth—is wondering where to look and what to use during a given time of the year. We’ve all been there. Hopefully, this series on smallmouth behavior and tactics through the seasons boosted everyone’s confidence and gave you a leg up before hitting the water next.