Fishing in the Wind: Casting 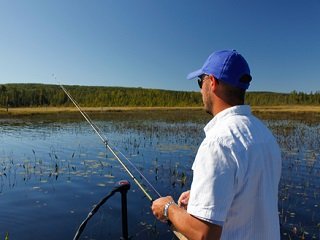 Effectiveness on the water is not 100% dependent on the skill of an angler (thank God for that). There are several external factors—most of which environmental—that play large roles in what happens during your time on the water. One such factor is the wind, which can impact everything from water clarity to your casts. Today, I’ve provided you with a few tips on how to manage your fishing when the wind picks up.

One of the hardest aspects of fishing when the wind is strong is casting. When wind gusts reach high speeds, even the most accurate fishermen miss their targets and can even endure backlashes in their spools. The wind can push your line during the cast, creating a wide arc. This has an adverse effect on the retrieve, as the lure will follow the curve of the wind-pushed line, rather than your intended line. Furthermore, the wind tends to make a big bow in the line, which reduces your contact with the bottom and lessens sensitivity.

When you cast in heavy winds, it’s important to make sure to make firm, assertive casts, and to stop the line with your thumb, pulling it tight. This will help prevent backlashes and will also reduce the bow in your line. To counter the line curve created by the wind, I suggest aiming into the wind at an angle, away from your intended line. This way, when the wind does leave your line at a curve, it will curve into your intended retrieval line on the curve. Another thing to remember is that while your lure is flying through the air, lower your rod tip. The closer you can get your rod tip to the water, the less effect the wind will have on your line. This will provide a much better feel for what’s happening with your lure after it hits the water and settles on the bottom.

The next thing to think about is the direction you cast, which will be determined by the shoreline, nearby structure, and wind direction. Ideally, it’s smart to cast either with the wind or against it rather than perpendicular to it. If you have a current coming back that is either created by incoming water, or by the wind, you want to cast into the current, no matter what direction the wind is blowing. This way the bait will come down current right into the faces of the fish, as they will natural face into the current as they wait for prey items to float down current. The object it to play the current so that your bait passes by the shore or structure—anywhere fish may be holding.

There may be instances when, due to wind direction or structure, you may be forced to fish up current. Often, though, when casting with the wind in those situations, the bait reaches the bottom when it gets back to the boat. To prevent this from happening, make your cast and let the bait go to the bottom before working it back to the boat. Move it once or twice, and then reel it in and move on.

Fishing in heavy winds can be a bit frustrating, but if you take the time to really think about what you need to do to make the casts you want, playing the wind will become second nature. Be sure to return for the next part in the series, where we’ll explore the effects that wind has on water activity itself.