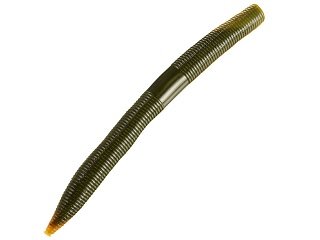 One of the most popular and most effective techniques used on the water is the drop-shot rig. Its subtle presentation does a great job of enticing fish to strike and it continues to be a favorite rig among anglers, which is why so many drop-shot specific baits exist on the market today. Today, I’ve outlined the baits that you’ll want to turn to when using a drop-shot rig.

A finesse worm in the 3 ½ to 4-inch range is a great place to start. With a finesse worm, you’ll want to go with natural colors, such as green pumpkin or pumpkinseed. Similar to finesse worms, you have minnow baits. Most lakes in the north have a high number of Cisco, alewives, and shiners, which makes a minnow bait appeal to fish in a variety of regions year-round. There are a variety of color patterns from which to choose, depending on the time of year and the forage available, but silver with a black back is always a good place to start.

Many anglers love to use Senko worms when drop-shotting, as well, mainly because it can be rigged in a few different ways. For instance, you can start with a normal nose hook, but if the fish aren’t into it, you can switch to a wacky rig. Senkos come in a variety of sizes and colors, but you can pretty much take your pick and still have great results. The action of a Senko in the water is second to none in weedy waters between 5 and 10 feet, or on beds during the spawn.

You can also use creature baits—beavers, brush hogs, and tubes—when using a drop-shot rig. The beaver is useful when pitching docks with a drop-shot, due to its enticing gliding action in the water. Brush hogs are a little bigger, though, so you’ll have to give the rig more slack after the cast. Because of a brush hog’s weight and overall gliding action, it will work itself. When using tubes on a drop-shot rig, nose hooking them will work just fine. Some anglers like to insert small, buoyant objects, such as an ear plug, into the tube, which causes it to float better and gives it a more natural presentation. Lizards and craws can work wonders on a drop-shot rig, as well, especially on beds, where such predators feed on bass eggs. Bass won’t hesitate to ferociously strike anything that resembles them, so capitalize on that behavior with such baits during the spawn.

The key to catching a bass on the drop-shot rig is keeping the weight on the bottom and working the bait slowly. Also, while baits in the 4-inch range typically get the job done, don’t be afraid to switch sizes; sometimes bigger baits will be the answer. All the baits outlined above have proven to be effective at catching fish on the drop-shot rig, but it is up to anglers to figure out what the bass want on a given day.