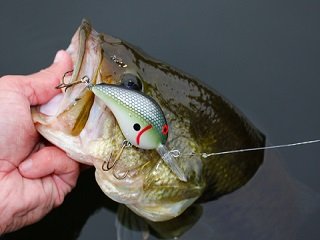 Bass can be downright frustrating when it comes to their unpredictable nature. It can be difficult enough to locate them laterally, even in optimal weather or seasonal conditions, but when bass are suspended at specific depths, many anglers seem to hit a wall. Locating and effectively fishing suspended bass isn’t an impossible task, though. Here are a few tips to help you when bass are suspending in your local waters.

It’s not unusual to find a decent number of suspended bass during the fall when fish follow schools of baitfish into the backs of creeks and coves, where they’ll actively feed. Even though the bass will be suspended a few feet below the surface, even in ten feet of water or more, you can still catch them on shallow crankbaits, jerkbaits, spinnerbaits and lipless crankbaits.

When confronted with suspended bass, it’s smart to seek out areas where the bass are suspended close to cover or structure. Such fish tend to be easier to entice than those hovering over deep water and not relating to anything. You’ll want to make longer casts to the fish suspended near cover, though.

With bass suspended in open water, finesse lures tend to be more effective than large, bulky baits, and you’ll need a lure that will hold in the strike zone longer, such as a grub, jigging spoon, jig, or worm.

Once you identify the depth at which the fish are holding, make your cast and count down your lure until it reaches the desired depth. If the fish are extremely deep, you can get over them and jig the baits vertically, if you’re using a vertical lure, or cast crankbaits that dive to specific depths. When using vertical tactics, some anglers drop finesse lures on light line and shake them in the face of the suspended bass, which works wonders when the water is clear.

Targeting suspended bass may not be as easy as burning lures through vegetation or jigging, but it’s not impossible. Simply being patient and choosing the right lure and technique for a given circumstance will yield surprising results.